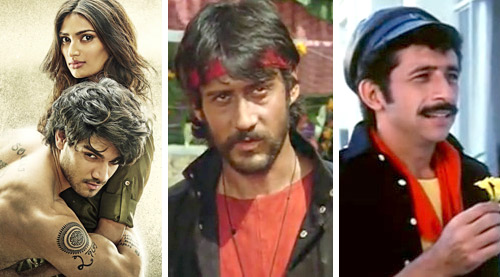 Oh, how much Bollywood loves its heroes. The first time audiences loved this title, it was for Jackie Shroff's Hero which came more than three decades back. Now, it is all coming back full circle for the industry as well as the audience, what with the film's remake hitting the screens in a little over a month from now.

Here is looking at 10 Bollywood films where a film's title has comprise of 'Hero'.

It is expected that Nikhil Advani's Hero, which is the namesake remake of Subhash Ghai-Jackie Shroff's remake, would be worthy successor to the original. Meanwhile, one thing is for sure that all eyes would be on how the eventual product turns out to be, considering the first version being so hugely popular. With Sooraj Pancholi and Athiya Shetty making their debut, Salman Khan and Eros are backing it in a big way too.

Subhash Ghai saw a hero in Jackie Shroff and though the actor had been seen earlier on the big screen, Hero was his quintessential commercial hero launch. The film, with Meenakshi Sheshadri, Sanjeev Kumar, Shammi Kapoor, (late) Amrish Puri and Shakti Kapoor in principal roles was a smash success at the box office and gave Bollywood another major hero after Amitabh Bachchan and Mithun Chakraborty.

Half a decade down the line, Naseeruddin Shah and director Ketan Mehta tried a mainstream commercial outing with Hero Hiralal. The film had Shah play an auto rickshaw driver who falls in love with a film actress, played by Sanjana Kapoor (Shashi Kapoor's daughter). The film failed at the box office though its title song was a hit.

It took almost a decade to have filmmaker show courage and pick 'Hero' as his film's title. The man was David Dhawan who roped in Govinda, who was indeed ruling the roost back then, into Hero No. 1. With a staple team of Karisma Kapoor, Shakti Kapoor and Kadar Khan joining the show, this family comic entertainer had hints of Rajesh Khanna's Bawarchi and turned out to be a major success.

Arshad Warsi wasn't as successful though in making 'hero' as his own, what with Hero Hindustani not quite bringing in much of an audience. Though the title song turned out to be quite popular and there were some good fun moments created too by director Ajiz Sejawal, Hero Hindustani couldn't work across 'hindustan'.

The 'hero' that did work across 'hindustan' was The Hero: Love Story Of A Spy'. Reuniting Sunny Deol and Anil Sharma after Gadar - Ek Prem Katha, the film was a slick action affair which also marked the debut of Priyanka Chopra. However, expectations, costs as well as selling price were so high for the film that despite good initial footfalls and major moolah, it could just attain an average status.

When Sunny Deol came together with Salman Khan, one expected Heroes to be a mighty entertaining affair. As it turned out though, they featured in different segments of this multi-story affair that had its moments, though not quite consistently. The film was a coverage affair at best though most agreed that the segment featuring Salman Khan and Preity Zinta as a Sikh couple was the best of the lot.

When Rajkumar Santoshi decided to make a comic outing with Shahid Kapoor, expectations were quite high. The film turned out to be a mixed affair though which did have some really hilarious moments, but then, also fell flat at number of junctures. The film did earn some moolah but then one expected much higher footfalls and moolah coming in.

It was rather courageous on part of the makers to have a one film old hero arrive with a film that had a title 'hero' in it. However, yet again it was David Dhawan who decided to take that risk and brought in Varun Dhawan for Main Tera Hero. The film released earlier this year and after a decent start, went on to consolidate its place at the box office by being a good success.

When producer Sajid Nadiadwala and director Sabbir Khan were looking at a 'dhakedaar' title for Tiger Shroff's launch, it was a no-brainer to have the word 'Hero' in there. It was a unanimous decision to call the film Heropanti once the film's script was locked. All eyes are on Tiger Shroff and his leading lady Kriti Sanon, and both of them turned out to be pretty impressive. Audience gave a nod of approval too.