Shah Rukh Khan is a superstar to his millions of fans but is a doting dad to his three kids – Aryan Khan, Suhana Khan and AbRam Khan. His daughter Suhana maybe away in London studying in a film school but she sure is someone who is ready to follow the footsteps of her father. As she is doing theatre in her school, her parents are absolutely thrilled about her achievements. Recently, SRK had shared a picture where she was helping him learn song lyrics of 'Mere Naam Tu' from Zero. He captioned the candid picture as, "Of all the things I have done for Mere Naam Tu…this is the sweetest. My daughter teaching me to get the lyrics right on the sets. Hope after she sees the song she approves…” 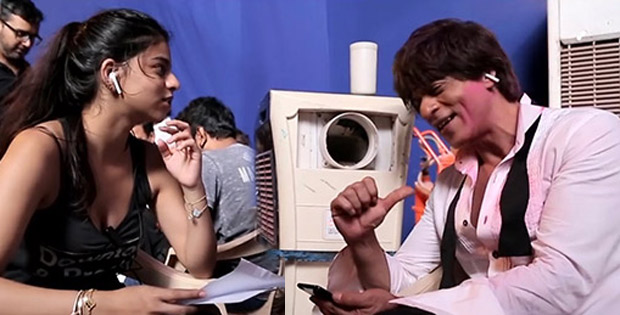 But, recently interview, Shah Rukh Khan revealed to that as Suhana is learning acting, she has to spend time on sets and learn production. This was very much the reason she was on the sets of Zero. "She came on sets because learning acting has a lot to do with spending time on the sets and learning production. She did the same in London and while she was here. She said she still has two weeks to go back to London and we were shooting a song for Zero in the coming two weeks. So she came here to have that experience," SRK said in a group interview.

The doting dad SRK was in London last month and had shared a few pictures along with Suhana post her performance in a school play in which she essayed the role of Juliet.

Coming to Zero, the film showcases Shah Rukh Khan as the vertically challenged Bauua Singh, Anushka Sharma as Aafia, a girl who is a scientist living with cerebral palsy and Katrina Kaif as a Bollywood Superstar named Babita Kumari.