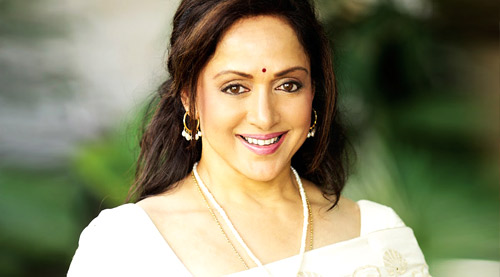 Ramesh Sippy who hasn't directed a film for 19 years is back at it. He is also back with his favourite actress Hema Malini who was part of his first three iconic films, Andaz, Seeta Aur Geeta and Sholay.

All three were turning points in the Dream Girl's career. Hence, when Ramesh Sippy who has been toying with the idea of returning to direction for a decade, approached Hemaji with a rom-com entitled Shimla Mirch she was all for it.

But when Hema Malini, the Bharatiya Janta Party's MP from Mathura, heard the script she did a double somersault. The plot of Ramesh Sippy's new film revolves around a mother and daughter and a man who comes into their life.

Says a source, "Hemaji's first reaction was, 'I can't do this.' Not now when I've political duties to perform. My party (the Bharatiya Janta Party) won't approve.' Rameshji had only one response. He asked Hemaji to trust him. Though Shimla Mirch is a daring love story, it isn't tantalizing or cheesy. Hemaji who has never shied away from challenges agreed to play the boldest role of her career."

Older women falling in love with younger men is nothing new in our films. Raakhee Gulzar's character fell in love with a much younger man Rishi Kapoor in Ramesh Talwar's Doosra Aadmi. In Farhan Akhtar's Dil Chahta Hai, Akshaye Khanna has an affair with a much older woman Dimple Kapadia. And in Shashilal Nair's Ek Chotisi Love Story, Manisha Koirala seduced a 15-year old boy.

What makes Ramesh Sippy's Shimla Mirch especially audacious is the plot premise of the mother and daughter falling in love with the same man. Rakul Preet Singh (of Yaariyaan) who plays Hemaji's daughter is the same age as Hemaji's real daughter.

The closest we came to such a sexually liberal outlook in our cinema was when two sisters played by Mala Sinha and Tanuja fell in love with the same man Dharmendra in Guru Dutt's Baharen Phir Bhi Aayengi in 1966.

Recalls Mala Sinha, "That was quite bold for those times. When Guru Dutt Saab narrated the story to me I was unsure. But then he was confident. Of course he passed away before he could make the film. His brother directed it."

Decades later in Yash Chopra's Lamhe, Sridevi falls in love with the man who loved her mother. Though Lamhe was rejected by the audience back then, it remained Yash Chopra's personal favourite from his oeuvre.

Shimla Mirch breaks the unwritten moral code of the traditional Hindi cinema by casting the mother-figure, and that too someone with the image of Goddess Durga, as the predator in her own daughter's life.

Says Hema Malini, "We can go on making the same stories over and over again. Or we can try to do something a little different. This film is not a shocker. It's light hearted story. I am sure it will be done tastefully and won't offend anyone."

Says Rajkummar Rao, "It's a very unusual love story. There is Rakul Preet and Hemaji paired with me in the film. That's all I can tell you right now."