After setting the rumour mills churning about their alleged relationship initially, Harshvardhan Rane and Kim Sharma have now become uninhibited about it. The couple, post that, has become quite candid on Instagram and don’t mind posing for shutterbugs together during public appearances. In fact, Kim and Harsh’s Instagram pages have many lovey-dovey pictures of the duo. And now, one of their pictures that have gone viral on social media is the one where they two of them are sharing a passionate kiss. 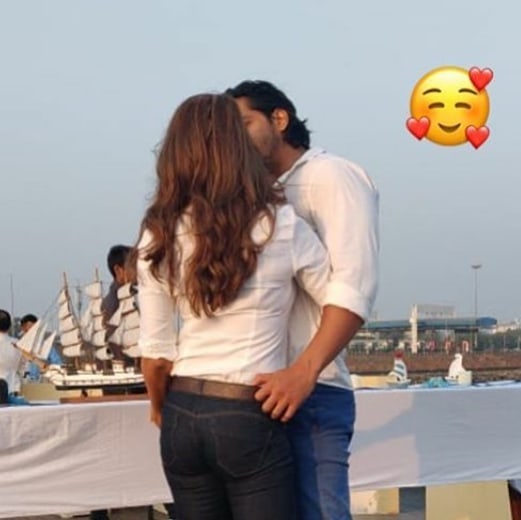 Harshvardhan Rane and Kim Sharma were recently snapped sharing a passionate kiss on a public place on the rooftop of a sea-facing restaurant of sorts in Mumbai. The two of them were also quite coordinated in their dressing style as the two of them were spotted in denims and white shirt. While the picture wasn’t shared by either of the Bollywood celebs, it seems to have caught the attention of fan clubs that have been making it viral on Instagram.

Recently, Kim Sharma was in news for her bikini pictures as she enjoyed a beachy getaway during her birthday. Besides that, pictures of her with boyfriend Harshvardhan Rane too have been garnering immense attention on social media. Here’s a sneak peek of some of their clicks together that range from romantic to a frame worthy family portrait:

Also Read: Did Harshvardhan Rane and Kim Sharma just CONFIRM their relationship at the screening of Paltan?