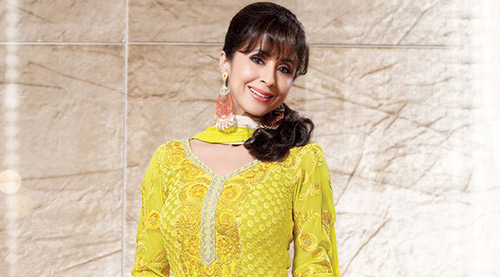 Urmila Matondkar is not an easy person to know. I've 'known' her for 20 years. Not a single visit of mine to Mumbai would be complete without a visit and a lavish meal at her place. Her homes, the first one and later the larger swankier one, were warm and well-appointed. Her parents would be there to chat with me, and then over a hearty meal Urmila and I would laugh and bitch about everyone and anyone, uncensored. She's also a great mimic and does amazing takeoffs on everyone from Asha Bhosle to Shabana Azmi.


Shabana who worked with Urmila when the latter was still a child in Masoom and Bhavna, says Urmila was a born actress.


There was plenty of time at the dinner table for gabbing sessions. The meals would last quite a while. Because, boy oh boy, Urmila really tucked in, and was not the least apologetic about it. She would warn me that she takes time to eat and then proceed to demolish all the dishes with her amazing appetite.


So the biggest mystery about Urmila, among the many mysteries that qualified her lifeâ€¦where did all that rich food go? Certainly not to her hour-glass figure. To top it all, Urmila claimed she never went to the gym. That was hard to believe. But another voracious eater Priyanka Chopra also claimed the same. So it's hard to decide what to believe, the slim figures or the emptied out plates.


Urmila is great fun to be with. Our abiding rapport began when Ram Gopal Varma introduced me to her over the phone during one of my visits to Mumbai. Urmila immediately invited me home for lunch. Since then our mutual warmth and love grew to include her family and mine into our circle of camaraderie.


Coincidentally I've been in Mumbai on several of her birthdays. I've seen the entire building where she lives lined up with bouquets from friends fans and producers. Now the bouquets are no longer there, Urmila is no longer the celluloid diva she used to be. But the aura remains. No fan, no journalist would ever dare to misbehave with her. She was a Queen. She remains one.


I remember her walking into my friend Kamal Haasan's premiere of Abhay in a sensuous slit dress and furs. All the shutterbugs who were clicking my rakhi-sister Raveena Tandon ran to click Urmila.


She was a head-turner. She still is. But the roles have dried up. The queue of directors eager to narrate their scripts to her is no more to be seen at her doorstep. I don't think the roles would return. Nor would she return to them.


Her days of glory while they lasted created a body of work that was as curvaceous as her body: Rangeela (Ram Gopal Varma's only romantic film), Satya (where in spite of Manoj Bajpai, she held her own, especially in a key breakdown sequence and in that lilting Lata Mangeshkar melody 'Gila Gila Paani' which was cut out of the film), Kaun (where her horror act was chilling), Pinjar (a masterly adaptation of Amrita Pritam's novel about a rape victim during the Partition), Ek Haseena Thi (where she played hero to Saif Ali Khan's villain), Pyar Tune Kya Kiya (she was heartbreakingly poignant as a victim of unrequited love), Maine Gandhi Ko Nahin Mara (spirited as a daughter trying to cope with a father suffering from Alzeihmer's), Khubsoorat (she played the Plain Jane who transforms into â€¦.ummm.. Urmila Matondkar)...and so many others.


Today Urmila is on her own. I don't know of any man in her life. We never spoke about it. Though she was a great pal, there was always a line which no one was allowed to cross.


I hope she finds someone who can cross over that line to be by her side.