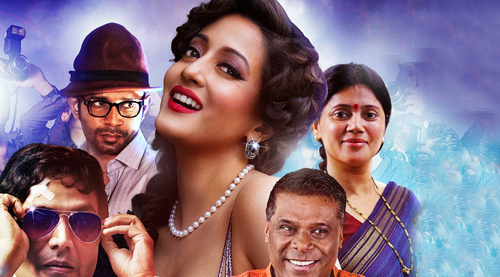 Though music launches are turning out to be a rarity in current times, it is almost extinct to see one happening out of Mumbai. However, the

makers of upcoming flick Bollywood Diaries have different plans. They are not just launching the film's music with much fanfare; they are doing so in Delhi

NCR, with an eye on the target audience.

"Bollywood Diaries is a film about living your dreams; the ones that revolve around the silver screen. It is about three individuals who defy stereotypes and

to make a splash in the world of Bollywood. Director K.D. Satyam felt that since the film is breaking the norms at its very concept level, it would be prudent to do

something different than conventional when it came to the promotional campaign as well," informs our source.

Different ideas were sought and the one that found a unanimous nod of agreement was to host the music launch in a city outside Mumbai.

"Every day, there are hundreds of Bollywood aspirants who arrive in Mumbai. The film is about these people. I felt that if we choose Delhi NCR as the starting point

for our campaign, it would get the right messaging across board," says Satyam, who has earlier been hailed for his work as a writer in children's film Gattu.

Since there are quite a few actors from Delhi who have already made a mark in Bollywood during last few years, and Noida is a hub for many a film and TV production

houses, it was decided that Amity University would be the first step towards introducing Bollywood Diaries to the audience.

"I have heard great things around this place. The best part is that it is bubbling with a lot of energy. This pretty much compliments the space that Bollywood

Diaries is in," he adds.

The filmmaker would be joined by composer VipinPatwa and lyricist Dr. Sagar. Amongst actors, Raima Sen, debutant Salim Diwan and Ashish Vidyarthi would fly down for

the event as well.

"We are excited to interact with students when we land there. Who knows, we could possibly even catch hold of a potential actor or two," chuckles Satyam before