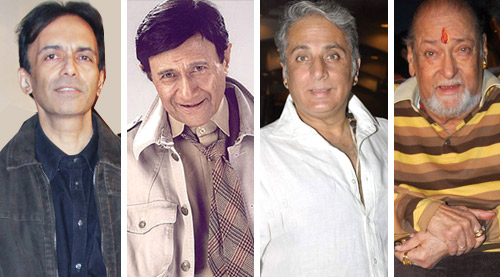 Aditya Raj Kapoor (s/o Shammi Kapoor): "A Father need not do his best to bring about a change in the mind of his children, as long as he tells them what he is doing. With that, I realize that my father led the most transparent life that one could imagine. Never a dull moment, my father excelled in sucking in the high octane moments of life. He never knew how to breathe any other atmosphere. I do remember, once when I was caught reading some unsavory books in my pre-teen days. Rather than reprimanding me, he asked me to read as many good books. This, he enforced most vigorously and the habit has brought the world to my impoverished mind. Much later on, in my adult life, he let me know that his father had caught him doing the same and this was the advice that he had been given, which was passed on to me. Even when travelling, I was encouraged to visit the bookshop in the hotel, or at the airport. Of course, buying a book and its eventual reading are events of two time zones, but my father saw to it that at least the first step was taken and patiently awaited my inherited curiosity to turn a page. I shall be eternally grateful to my father for this. Any day that a child smiles in gratitude is a Father's Day. For me, this is embedded in the abundant vibrancy of life that my father exposed me to in the form of living selectively and appropriating choices. Sometimes in reality and then some more through the reflections of reading. It has stayed as a constant smile in my heart. Happy Father's Day!"


Tajdar Amrohi (s/o Kamaal Amrohi): "It's hard to sum up my thoughts on my father in just a few words. He was par excellence in every aspect. There will never be anyone like him. The dye and cast creating my father was broken by the mighty Allah Himself. I feel his presence all around me. He is always with Choti Ammi (the legendary actress Meena Kumari) to bless me."


Suneil Anand(s/o Dev Anand): "My Father, the legendary Dev Anand, was truly amazing in every sense of the word. Besides being a good father, he was also my good friend, confidante, mentor, inspiration, and role model. God bless him on this Father's Day."


Owais Husain (s/o M F Husain): "There're no full stops to his life. His life has been charted by destiny. My father was older than modern independent India. As a child, he struggled to make ends meet. During British India, he painted slogans against the rulers. In independent India, he painted pictures that were sold for astronomical sums of money. He didn't plan any of this. He didn't plan his exile in Dubai or his citizenship in Qatar. My father was a nomad all his life. But he was rendered homeless in his final years. He stayed close to me in Dubai and I tried to make him feel at home. I know he missed home in India terribly. You can take MF Husain out of India. But you can't take India out of MF Husain."


Amit Kumar(s/o Kishore Kumar): "In our time, there was no day set aside for mothers and fathers. My father was from the village and never subscribed to these urban laws of living. His advice to me for the 35 years that I was with him was to believe in simple and high living and to avoid hypocrisy at any cost."


Aarya Babbar (s/o Raj Babbar): "I've learnt everything about life from my father. But the one lesson I've learnt from him as a professional actor is the value of time. From him, I've learnt that when a producer pays for an actor's time, he can do what he likes with it. And from that came my biggest lesson, patience."

“If it wasn’t for Vishal Anand, Chalte…