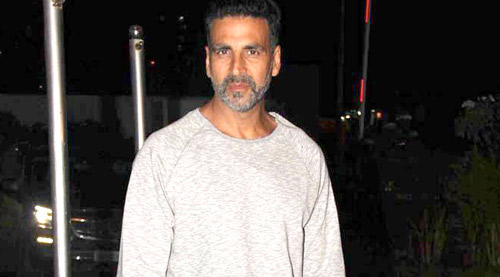 "We need more and more theaters. Entertainment tax should be cut," said Akshay Kumar in a Bollywood Hungama exclusive video interview with Faridoon Shahryar. Akshay strongly feels that drastic steps need to be taken by the Government of India to reduce entertainment tax so that the ticket pricing could be reduced and more people can watch movies in cinema halls instead of resorting to piracy. Mr Kumar is extremely passionate about his upcoming film Airlift. I have never seen him so emotionally attached to any film in the last nine years the way he is with Airlift. Over to some vignettes from the interview.

Airlift looks like a very very interesting subject. I must say hats off to you for doing something like this. It's the biggest evacuation in the history of mankind.

Today the biggest problem is refugee problem. Today 27 million refugees are there in the world and this film deals about that. What happens to them, where are they going, they have nothing. Whatever they have earned in their life, their currency has become zero because of war. And yes it's a story which should be told to our children, to the youth, it should be a compulsory thing in our textbooks.

I'll be very honest there have been many people I've spoken to as far as Airlift is concerned, they are really happy with the fact that you're doing really interesting cinema right now and just taken the context of patriotism in a very different manner, it's not the conventional patriotism.

Do you know, this subject was offered to someone else and those people said it's good, documentary bana lo iski. So I know these things don't have bigger commercial values but it's worth making to bring it in front of people.

Even in terms of box office, things are changing. The way response for Bajirao Mastani has been, many people were like classical type ki music hai I don't think it will work or not but it has worked brilliantly.

Bajirao Mastani is a beautiful film, it's a painting.

There was a very interesting article by Shekhar Kapoor recently, where he has said some very interesting things about the fact that there are 25000 screens in China and there are 5000 screens in India, 8000 screens in India but 5000 for Hindi movies and the ticket pricing ought to be reduced. Piracy is a big problem emanating from high ticket prices. People are watching movies on their mobile the second day after the release. A local Chinese film is having a business of 100 million dollars. Do you feel the fact that if we can streamline a few things in India then there can be a change in Box Office prospects?

To be honest, 1.5% or 2% of India watches Bollywood films (in cinema halls) and in that also we get so much business. Imagine if 15 to 25% watch what can be the business. People have to understand why this doesn't happen because of the pricing of the film, it's the actual fact. A ticket priced at 300 or 400 rupees is not easily affordable as maximum people have limited salaries. So, they plan, they don't watch all the films. Imagine if we cut down the whole thing and start getting 12 to 15% of population of India watching our films plus obviously we need more theaters. We need more and more theaters. Entertainment tax should be cut, and there are a lot of things which we could work on.