Last Updated 02.07.2020 | 7:12 PM IST
feedback language
follow us on
Home » News » Bollywood Features News » Bollywood News “I am fortunate enough to be working again with Rishi Kapoor in 102 Not Out”- Amitabh Bachchan

Filmmaker Umesh Shukla's 102 Not Out will see Amitabh Bachchan and Rishi Kapoor sharing screen space after a gap of 27 years. The hit jodi has worked in several iconic films including Amar Akbar Anthony, Kabhie Kabhie, Ajooba, Naseeb and Coolie. The two veteran actors are known to be the stalwarts of Hindi cinema. Now, they are back with a fun father-son drama 102 Not Out that is set to win audience's hearts.

At a special evening organized at the iconic Royal Opera House in Mumbai on April 26, Rishi Kapoor and Amitabh Bachchan addressed the media in a fun interaction. The megastar began the conversation by praising Rishi Kapoor. He said, "The reason why we are here together is that we have a history of films together. We started with Kabhie Kabhie, then Amar Akbar Anthony, Naseeb and it's been a great honour to work with Rishi once again." 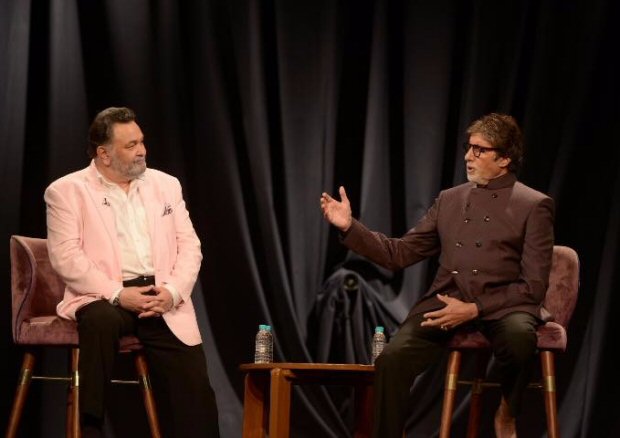 Rishi Kapoor, himself, could not stop praising Amitabh Bachchan's craft. Revealing about thespian's work, Rishi said, "He's such a delightful actor to work with. I have learned a lot from Amitabh ji and his craft of acting. He flirts with the character he plays as he works himself into the character. This is his craft."

Rishi Kapoor and Amitabh Bachchan came together for the first time in Yash Chopra's 1976 film, Kabhie Kabhie. "We did Kabhie Kabhie together and at that time I had started Deewaar with Yashji and the mood and character were very different from Kabhie Kabhie. Almost after two days of finishing shooting for Deewaar, we were in Kashmir shooting for Kabhie Kabhie where there was romance, flowers, elegant clothing. But this was the craft of Yash Chopra as he could switch from one film to another. It was a wonderful experience shooting in Srinagar. I was shooting with Chintuji (Rishi Kapoor) for the first time."

Speaking of their 1977 iconic film Amar Akbar Anthony, Amitabh Bachchan reminisced how the film ran for 25 weeks in 25 theatres in Mumbai. Recalling some of the funniest moments from the film, Amitabh said, "Manmohan Desai was a mad genius. We used to sit and laugh sometimes. We used to be like 'Yeh kya karwa rahe hai? Yeh galat hai.' Three healthy men are giving their blood via one saline to an older woman. This cannot be medical history. And Manmohan Desai used to just shout saying you don't know anything. He would just curse us. But, he was right. In the theatre when that used to come, the theatre would just explode. Unbelievable reactions." The megastar further quipped, "The climax scene is on and the heroes are singing 'Ek jagah jab jama ho teeno, Amar Akbar Anthony' but villain can't understand that reference.

Amitabh Bachchan further said, "We worked together in Coolie and Naseeb which were wonderful films and I am fortunate enough to be working again with Rishi ji in 102 Not Out." To this, Rishi Kapoor responded, "Not many have a journey like us. We have been working for 44 years and if God wants us then we may work for the next 44 years like this only."

Rishi Kapoor also recalled a scene from 'Chal Mere Bhai' from Naseeb as the megastar had to act drunk in the scene. As he never used to drink, Rishi remembered how Amitabh Bachchan aced the shot. He said, "There was shoot for a song ‘Chal Chal Mere Bhai’ and it required us to look drunk and Amit ji aced it with such perfection that he actually looked as if he is drunk. And for me, it was a learning experience."

It was a night full of nostalgia as the two stars shared anecdotes and praised each other's iconic work. Amitabh Bachchan said, "I am yet to come across an artist who can lip sync as perfectly as Rishi ji. He doesn't just lip syncs but syncs the expressions on his face! I noticed the same temperament in his son Ranbir Kapoor of whom I'm a great fan."

A Sony Pictures Releasing International Production and worldwide distribution- 102 Not Out is Produced by SPE Films India, Treetop Entertainment and Umesh Shukla’s Benchmark Pictures. The film releases worldwide on May 4, 2018.

Also Read: When Amitabh Bachchan and Rishi Kapoor shot without footwear for 102 Not Out