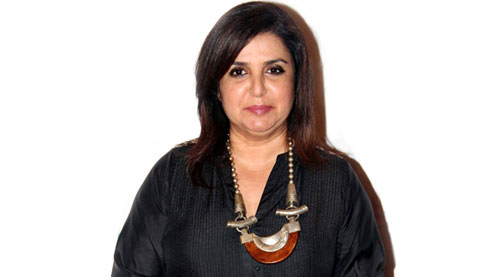 Farah Khan has managed to leave the demons of Tees Maar Khan behind her. With the first week collections of her Happy New Year (in excess of 150 crore) doubling the lifetime total of Tees Maar Khan, she has also joined the list of that elite bunch of filmmakers who have a mega grosser against their names. With the film expected to reap in further profits in the coming days, Farah is happy that her big film has paid big dividends.

Farah, Happy New Year is as big as it gets. For you what comes first - The canvas of the story?

I think of the germ of the story first and then the canvas comes in. I have always made big movies and with Happy New Year I wanted to show how I can make one of the biggest films while marrying two genres - heist and musical. That was a major challenge. Thankfully, the film's script allowed me to bring in the bigness quotient to dance as well as heist. (Laughs) No wonder, even Nandu Bhidhe's (Abhishek Bachchan) chawl is not like a typical Dharavi chawl; it is a little bit bigger!

Shah Rukh too agrees that it is one of his biggest ever.

Yes, for Shah Rukh as well as me, it is the biggest movie, both together as well as individually. The story demanded a certain scale and Shah Rukh was excited when he read the script for the first time. He said that there is a lot that can add on to the canvas. Then during shooting the film became much bigger. In fact as you can see, the climax is so big that even I can't make the same thing again. Every action and song speaks for itself.

With the film you have proved again that as a woman you can mount the film on such a huge scale. That must be something.

Honestly, I don't feel the pressure as a woman director. It is people out there who feel that women director should make these sensitive art-house movies that are socially relevant. (Smiles) I think my films are also socially relevant, they make a lot of people smile and feel happy. They are relevant for the industry as they generate a lot of business for the film industry.

The other day even Vivaan (Shah) commented how industry runs on such huge commercial films; so many houses run due to this. I guess it is reverse prejudice amongst so many that you are respected only when you bore audience to death. This is when you get respect. Arrey, as a woman director why shouldn't I make Shah Rukh show his eight packs and exploit his physicality?

You did exploit Abhishek's comic streak well; that's an all around feedback.

And guess that, amongst all actors, he was the only one whom I had to manage! He is the only actor who literally made me run behind him and take circles around a van so that I could make him come and deliver the shot (laughs). Can you imagine a director doing that? He likes to trouble me. I always tell him that I don't miss my son as both Czar and he are of the same age mentally.

On the other hand someone who has really grown is Deepika Padukone, isn't it?

Yes, as an actor she has really come on her own. Her dialogue delivery was very bad in Om Shanti Om while even as an actor, she had to be guided step by step. This time around though when she came for the dubbing, we finished it in jiffy. She has become very confident; her focus is on her career. Earlier everything was thrown on her face and now she is working with some real good directors. She has herself started taking a lot of interest in her own craft. As someone who has seen her grow over the years, that is such a welcome sight.