Last Updated 30.05.2020 | 11:44 AM IST
feedback language
follow us on
Home » News » Bollywood Features News » Bollywood News On Fleek in Red or All kinds of Jazz in Shimmer- There is never a dull moment in the life of Priyanka Chopra?

Life is too short to wear boring clothes and Priyanka Chopra adheres by this mantra to the T! Her style sensibilities got a new lease of life as she “arrived” in the West. What followed were a series of fabulous and distinct styles, casual and red carpet that are etched in the minds of the fashion lovers and critics alike! Priyanka made the West sit up and take notice of her acting prowess in addition to a rare streak of wit, intelligence and charm. All along, her keen sense of style play also aided in striking a chord. Her glorious resume also includes her duties as a responsible global citizen and a Goodwill Ambassador for UNICEF. Phew! Priyanka Chopra is one hell of a woman to reckon with and she takes it all in her stride, engaging us with her shenanigans. The diva has teamed up with supermodel sisters Gigi Hadid and Bella Hadid’s stylist Mimi Cutrell for her appearances. We must say that the diva has been striding with a renewed aplomb as she ticks off one ravishing style after another. This week saw her attend the Ciroc & Variety Women's Empowerment Brunch as the keynote speaker looking fiercely feminine in the boldest shade of red. Last night saw her shimmer, shine and dazzle at The Tonight Show Starring Jimmy Fallon. Priyanka is all set to reprise her role as the gun-trotting, world saving and goon-bashing FBI agent, Alex Parrish in Quantico 3.

Priyanka has earned a penchant to wade through the tricky waters of hues, silhouettes, cuts and classics with an enviable ease. A stylist’s delight, Priyanka Chopra had us picking up our jaws from the floor with these classier than ever styles. Here’s a quick style recap. 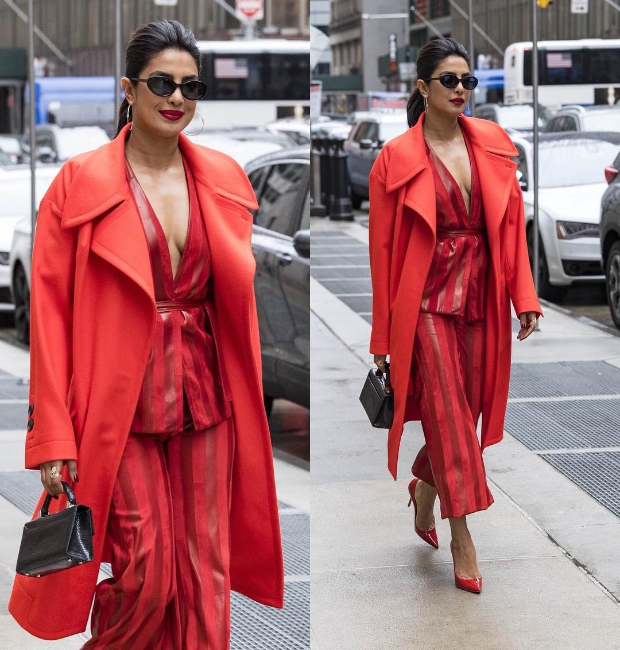 Also Read: Sigh! How do you do it, girl? Priyanka Chopra looks all kinds of stunning in this photoshoot for Vanity Fair!

Priyanka Chopra – All that jazz! 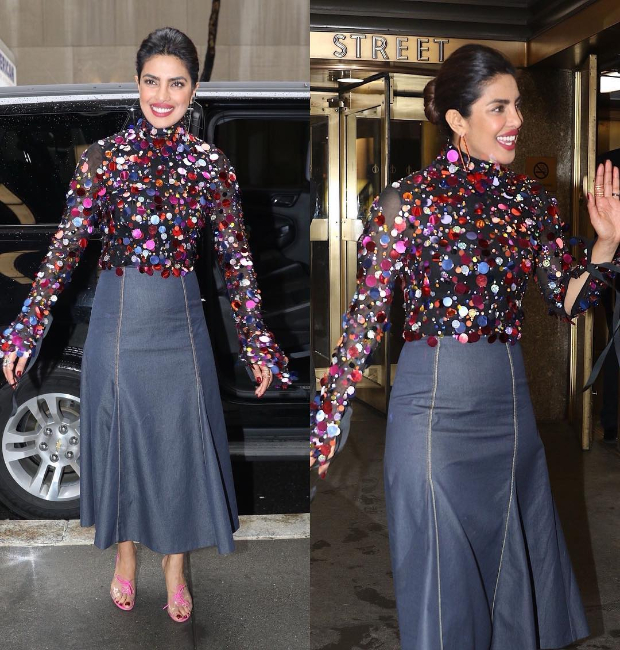 Priyanka flaunted a Carolina Herrera Pree-Fall 2018 ensemble featuring a multi-hued bold sequined top with back tie-up details and a denim flared midi skirt. Pink open sandals from Gianvito Rossi. Bright lips, defined eyes and a radiant smile along with an elegant updo rounded out her look. 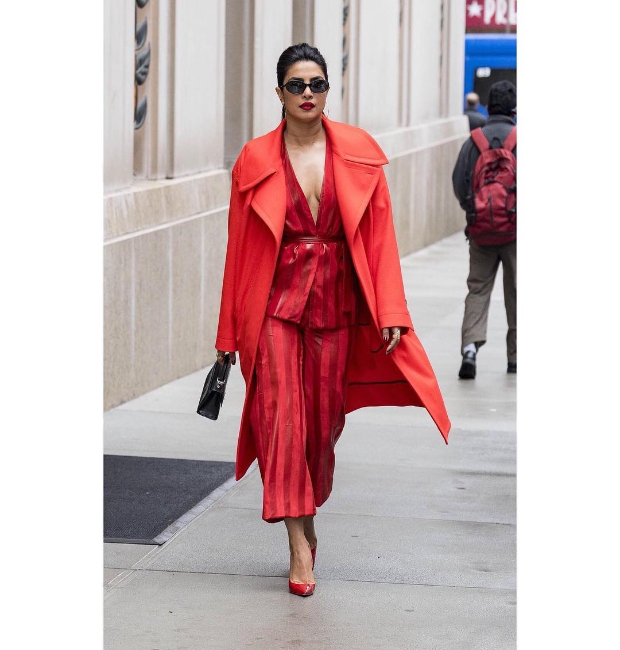 When in doubt, go red but do it with a saucy demeanour- Priyanka has us hooked with the snazzy ensemble that’s playful yet crisp at the same time! 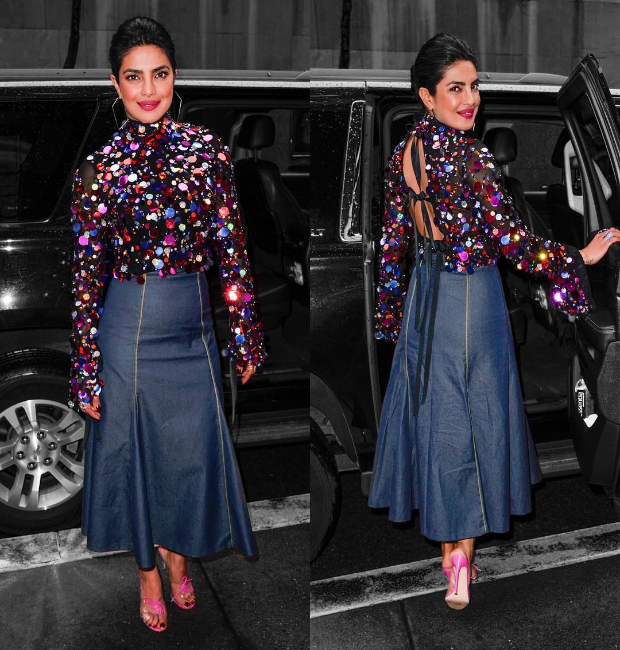 Her style from The Tonight Show Starring Jimmy Fallon is all kinds of awesome as she allowed the top of the ensemble take centre-stage with a fuss-free hairdo and upped the look with bright lips! 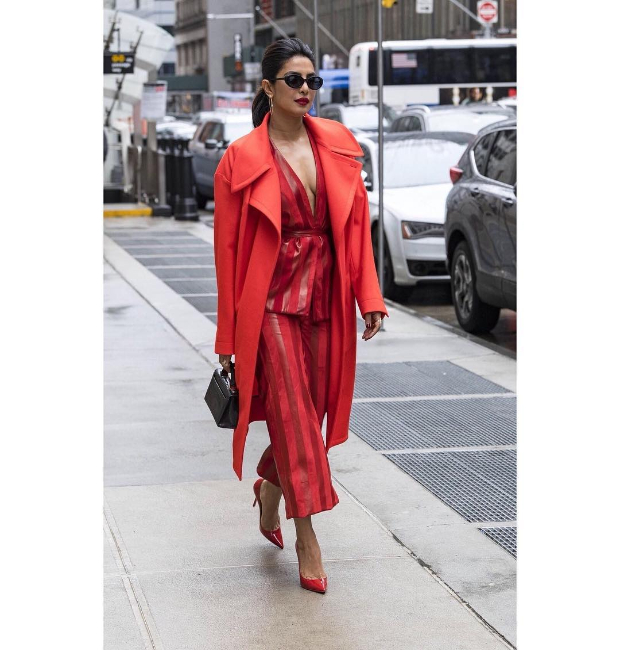 Go bold this season and bring out the reds and sequins with a dash of sass, just like Priyanka! 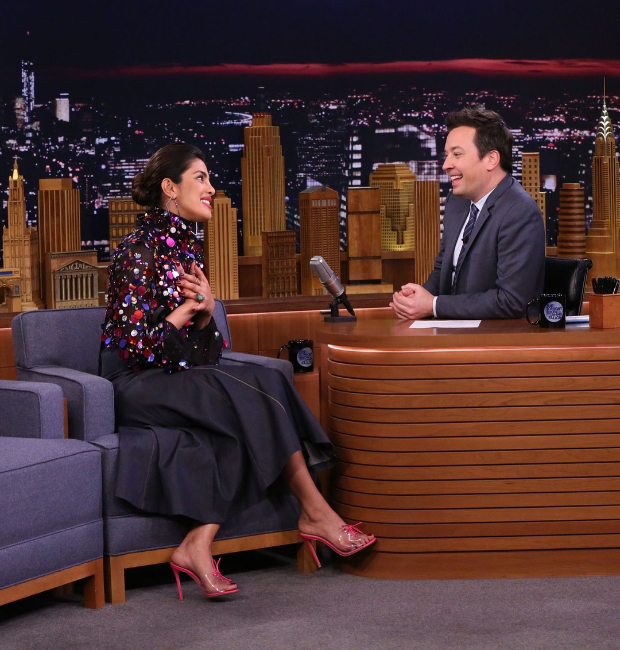 Produced by ABC Studios, Quantico 3 premieres on 26 April 2018. This season, it’s been three years since American hero Alex Parrish has had to navigate the dangerous waters of the Central Intelligence Agency and put her life on the line for her country. She has been living a peaceful, anonymous life somewhere in Italy. However, Alex is forced to abandon this idyllic existence when Ryan (Jake McLaughlin) persuades her to help him rescue Shelby (Johanna Braddy) from a notorious international arms dealer known only as The Widow.