The nominations for 66th Filmfare Awards 2021 are here. Like every year, the award show will felicitate those who gave tremendous performances on screen and off screen in 2020. Though the year was one of the toughest years owing to the pandemic, the film fraternity left no stone unturned in order to entertain their fans with their stories. The magic of the movies remains untouched whether it was a big screen release or a digital one. 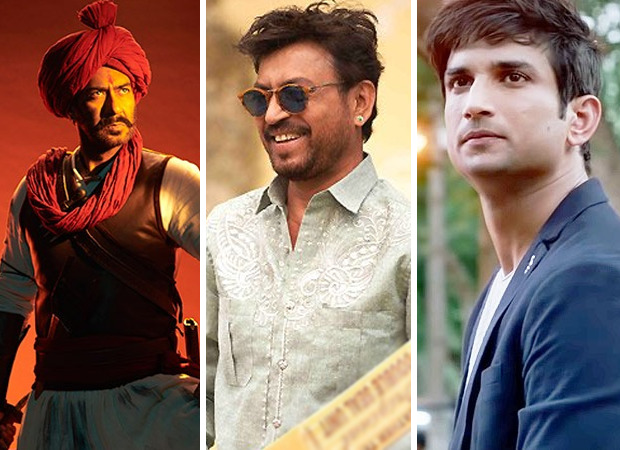 While 2020 saw majority of the films releasing on OTT or pushed to 2021, Ajay Devgn’s Tanhaji – The Unsung Warrior truly was one of the biggest box office success. The actor, in which the actor played the Maratha warrior, was appreciated for his performance.

Meanwhile, Angrezi Medium ended up becoming the last film of Irrfan Khan before he passed away in April 2020 due to his cancer. The actor was in treatment for the longest time but amid this, he shot this film. Due to his health and the pandemic, he couldn’t promote the film.

Apart from them, another actor nominated is late Sushant Singh Rajput for Dil Bechara, remake of The Fault In Our Stars, that released posthumously on Disney+ Hotstar breaking major viewing records. The tragic death of the actor was in headlines for the entirety of 2020. The actor passed away in June, reportedly by suicide, while his death case is being investigated by CBI. Having a huge fanbase who are rooting for his win, it surely is one tough category.

The other actors nominated are Amitabh Bachchan in Gulabo Sitabo, Ayushmann Khurrana in Shubh Mangal Zyada Saavdhan and Rajkummar Rao in Ludo.

While each other has a huge fan following, Tanhaji – The Unsung Warrior was clearly a huge win at the box office considering it was the only film in 2020 to cross the Rs. 200 crore mark. Meanwhile, Irrfan Khan and Sushant Singh Rajput fans would also want their favourites to be acknowledged considering their impact in the films and their last movies were memorable one. Once again, Best Actor category becomes the toughest of all.

All we have to do is now wait and watch who takes home the black lady.