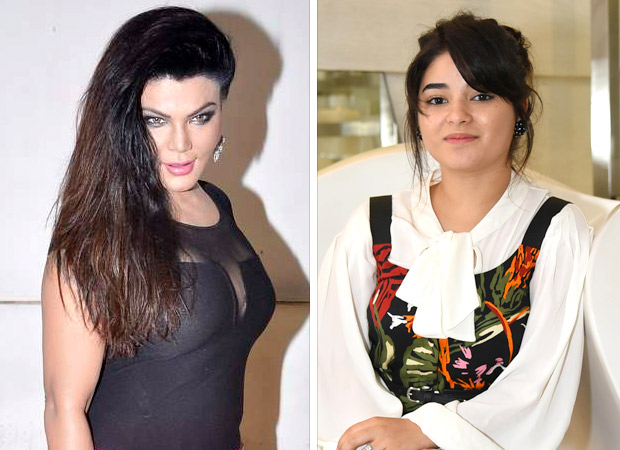 On Saturday Night, Secret Superstar actress Zaira Wasim was allegedly “molested” on board a flight from Delhi to Mumbai. A man sitting behind her touched her “inappropriately” with his foot. Rakhi Sawant’s heart reaches out to the young girl. But she also wonders about certain discrepancies in the incident, which many will agree are correct observations.

“Zaira, 17, was troubled by a co-passenger whose name I believe is Vikas. Why did she wait to land in Mumbai before sobbing her grief into the social media? She should’ve yelled and screamed and created havoc on the flight rather than wait for later. The minute the incident happened she should’ve slapped the man. I’d have slapped him and shouted for the co-passengers and cabin crew to gather around me. Ek aadmi kharaab hai tohbaqi log to flight mein achche hain na (if one man is misbehaving on flight there are other decent people on board). Why didn’t Zaira raise a ruckus then and there? Why wait? And why weep like a baby?”

Rakhi feels this is not the behaviour one expects from the Dangal actress. “In Dangal, Aamir Khan taught her how to fight. Zaira is the Dangal girl not some wimpy cry-baby trying to get public sympathy by weeping  She should’ve beaten the hell out of the offender.”

Rakhi Sawant gives a clean chit to the airline. “I travel a lot by Vistara. They are a very decent lot. Their cabin crew is polite and considerate. Their pilots are efficient. I can’t understand how or why the incident with Zaira was allowed to escalate out of hand.”

The actress also wonders at the swiftness shown in nabbing the alleged offender. “A celebrity child of 17 has a complaint about harassment. The alleged offender is nabbed and put in custody within hours. A poor little unknown girl of 5 is raped and killed. The offender roams around freely days after the gruesome crime. What is happening in our country? Somewhere priorities are very twisted. Kuch toh sharm karo (show some shame).”

Adds activist-filmmaker Ashok Pandit, “If it’s true (that the incident with Zaira Wasim really happened) then it’s very important to take serious action against the molester. Nobody has the right to humiliate a girl like this. Imagine her state of mind. Today it’s Zaira tomorrow it could be anybody’s daughter, sister, mother or wife. For me those who remained silent around her are bigger criminals then the molester. Having said that it’s also very important to hear the other side and then come to any conclusion.”

Writer-filmmaker Apurva Asrani says, “It is shameful that the man was manner less enough to rest his foot on her armrest. Compels me to believe any allegation against him thereafter. I am glad she has raised a stink about it and I hope people learn a lesson from this.”