Actress Neha Dhupia was accompanied by a special guest on the sets of her shoot. It was none other than her darling daughter Mehr Dhupia Bedi. Neha took to her Instagram handle and shared a GIF and series of pictures where she is getting her makeup done and Mehr is seen applying the eyeshadows on her and also observing the makeup artist doing her makeup. 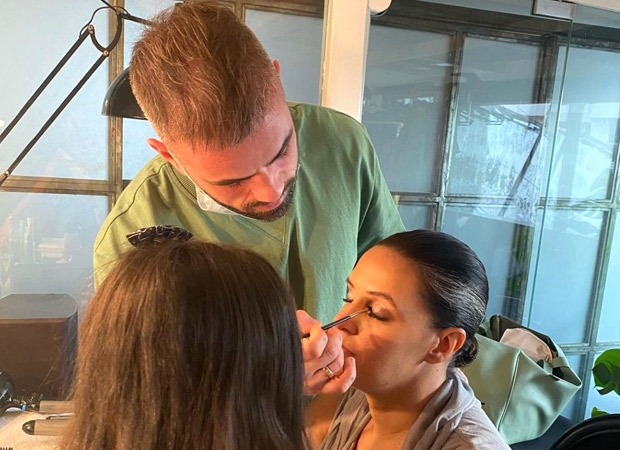 “My most favourite person in the whole wide world visited our set”, says Neha Dhupia as daughter Mehr accompanies her for a shoot

The Tumhari Sulu star captioned her post as, "My most favourite ???? person in the whole wide world visited our set and was pro at it all from make up to posing to adding to the madness ! I love you my baby girl ???? always by my side ❤️ ( @florianhurel you are in trouble ???? )". The actress jokingly said to her makeup artist that he is in trouble as Mehr is a little mischief-maker.

Bollywood actors Angad Bedi and Neha Dhupia tied the knot on May 10, 2018 at a gurdwara in Delhi in the presence of close family and friends. Baby girl Mehr came into their lives on November 18, 2018. The couple is all set to be parents once again as they are expecting their second child and made the announcement with a cute post on Instagram. Neha Dhupia, Angad Bedi, and Mehr twinned in black and Angad can be seen holding Neha's baby bump.

Neha Dhupia will next be seen in an action-thriller Sanak opposite Vidyut Jammwal and Chandan Roy Sanyal. It is directed by Kanishk Varma and produced by Zee Studios and Sunshine Pictures. She will also be seen in A Thursday directed by Behzad Khambata alongside Dimple Kapadia, Yami Gautam, and Atul Kulkarni.