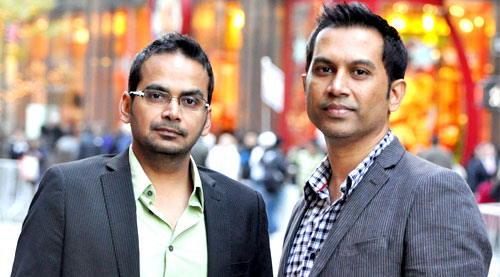 "Farzi is a very strong script. It is a very organic, earthy, crime thriller.It is the opposite of Happy Ending," revealed the wonderfully talented director duo Raj Nidimoru and Krishna DK (popularly known as Raj and DK) in a Bollywood Hungama exclusive video interview. "Farzi has a huge canvas as well. I can describe it as Shor In The City on steroids. It is a fast paced, intrigue action film. We shy away from calling it an action film," said Krishna DK. "It is more mainstream, pan India, Delhi, Dubai, Hyderabad, Nepal, a bit of Sri Lanka," Raj Nidimoru chipped in.

The starcast of Farzi comprises of Shahid Kapoor, Kriti Sanon and Nawazuddin Siddiqui. With the tremendous appreciation coming Shahid's way post Haider, he is on an all time high. He has always been an extremely gifted actor but many within the industry are of the opinion that he has made several wrong choices of films at the level of Script."Shahid is gonna come out in a very strong role in Farzi. He has a big range of acting to do. We are also giving him a new look,same with Nawaz. We wanted to exploit both these fine actors," Raj Nidimoru informed. "Nawaz is playing a cop. Shahid and Nawazare different parts of the same problem," DK added.

When quizzed about Kriti Sanon, DK revealed, "Kriti is the romantic interest with Shahid and she also has a character of her own. She is a very integral part of the film". The shooting of Farzi will start in January 2015 and the movie will release between June-August 2015. Sachin-Jigar, in all probability will be composing music for the film.

Raj and DK also informed Bollywood Hungama that once Farzi is complete, they may be working with Saif Ali Khan once again. Describing their relationship with Saif as a "perfect marriage", the duo is of the opinion that since they share similar tastes with Saif in movies, it makes it a joy to work with him.