Bollywood filmmaker-choreographer Farah Khan has shared a lovely throwback picture on Instagram starring Shah Rukh Khan, Salman Khan, Karan Johar and Anil Kapoor. In the photo, which dates back more than two decades, one can see everyone having a gala time, dancing at Sanjay and Maheep Kapoor's sangeet ceremony. 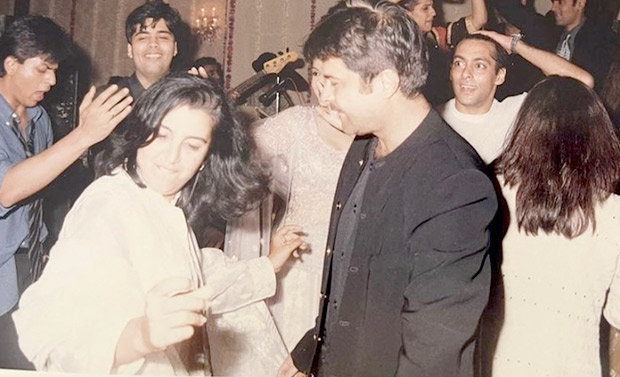 "So fun," filmmaker Zoya Akhtar remarked while Karan Johar added, "Wah." Maheep Kapoor wrote, "love it !!!!" and Sanjay Kapoor asked, "Where are the Dulha dulhan." To this, Farah replied, "dulhan is behind papaji.. half face.. dulha was (rolling eyes emoticon).

Sanjay Kapoor and Maheep Kapoor got married in December 1998. They are parents to Shanaya and son Jahaan. Their daughter Shanaya Kapoor is all set to make her acting debut with the film Bedhadak, which is produced by Karan Johar.

Also Read: EXCLUSIVE: Farah Khan quips she can make a film with Shah Rukh Khan in her sleep; says ‘His film Pathaan will be a huge blockbuster’