Not too long ago, we had reported that Arjun Kapoor has been approached to be the face of the Spanish Football League and was even invited to see a match. One of the key reasons for it was that the Mubarakan actor is a die-hard fan of the sport. So it wasn’t surprising to see him go gaga when he met football superstar Cristiano Ronaldo during his recent visit. 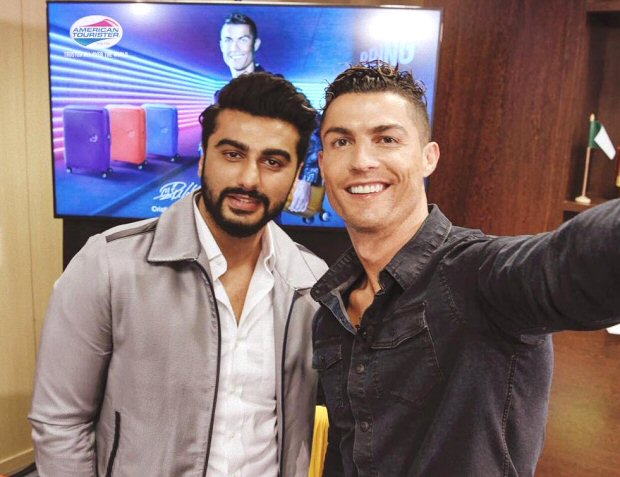 On more than one occasion, Arjun Kapoor has expressed his fondness and passion for football on social media. In the earlier reports, we had also mentioned that Arjun, who was supposed to be signed on as the face of La Liga, was supposed to attend matches. During his recent stint, it seems that he came across Cristiano Ronaldo, probably post a Real Madrid match [the team Ronaldo plays for].

The fanboy Arjun Kapoor also posted about the moment on his Instagram page saying, “Amazing feeling meeting & talking football with @cristiano !!! Heck of a player, heck of a guy. All the best for Kiev & Russia.”

Furthermore, recent reports also suggest that Arjun and Cristiano also had a long conversation about world football including the upcoming FIFA World Cup which kicks off on June 14. Besides that, Arjun also wished luck for Real Madrid’s forthcoming final match against Liverpool in Kiev, Ukraine.

But that was not all! If reports are to be believed Arjun Kapoor also went on to invite Cristiano Ronaldo to India. Sources were quoted in these reports claiming that Arjun wanted the football champion to meet the immense fan following Ronaldo has in the country. And for all his fans, Ronaldo has even promised that he will be making a visit here soon!

Besides Arjun, another Bollywood actor who had the opportunity to meet the Real Madrid player was none other than Ayushmann Khurrana.