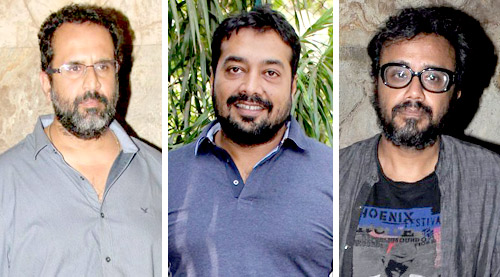 Earlier this year, we had seen how newbie directors had failed to give good cinema in 2015 in almost every case. As the first half of the year comes to a close, let us examine how nine established and reputed directors fared in the year.

Pre-Release Status: His debut film Tanu Weds Manu was a surprise hit in 2011. His next, Raanjhanaa, was a modest success in 2013 and was a violence-ridden love story.

What Happened This Year: TWMR is the biggest hit and highest grossing film of the year so far-terms that are not naturally synonymous as budgets too are important in the cost to profit ratio.

The USP of Aanand is that he invests a lot of authenticity in his projects vis-Ã -vis the locations, sets, dialects, culture and get-ups of characters. This time, he proved that he could make a true sequel with a compelling innovative angle not envisaged by anyone for a franchise-a Hariyanvi lookalike of Tanu from Kanpur. The film came like a thirst-quencher to an audience starved of story-driven masala entertainment for months, so the illogical aspects in the script were barely noticed!

Next Move: The director has to meet heightened expectations next time, and we do not mean a Part 3 of TWM. But things seem to be in place-for his next will be a film in which Salman Khan plays a dwarf!

Pre-Release Status: Anurag has always been the media's darling, a situation completely based on cultivated hype and hyperventilating fans who cannot sift the grain from the cinematic chaff. With some (questionable in credentials) international accolades also in his kitty for his weird, non-audience-friendly (he thrives on this kink!) cinema and his image as the visionary savior of Hindi cinema (sic), Kashyap dared to take on his biggest challenge-an exorbitantly budgeted musical thriller which he claims was designed for the masses: Bombay Velvet, his first film with stars.

What Happened This Year: Bombay Velvet joins the ranks of Hindi cinema's all-time giant disasters, and because the lifetime theatrical income was a fifth of its claimed budget, was a catastrophe beyond compare. The film did not even reach 25 crore nett in India before being booed out of the theatres!

Next Move: Kashyap continues to produce cinema with his partners. He has even claimed that he will migrate, but the joke is on him. Only someone with huge guts will bet on him now as director.

Pre-Release Status: Dibakar too is a minor pet of the media and the intelligentsia. While his last film Shanghai was a debacle, he had acquired acclaim and commercial success for his first and third films Khosla Ka Ghosla and Love Sex Aur Dhoka and was acclaimed for his second, Oye Lucky! Lucky Oye! as well. To his credit, every film has had different themes. But Dibakar too has a disdain for cinema that works with the masses.

What Happened This Year: Pre-release, he even fantasized that "My kind of cinema will become mainstream". But the general vibe of DBB was so unappealing, cold and dark that it just did not take off. The 'noir' influences screwed up the otherwise gritty film that should have been realistically made in a shoestring budget and released as a tele-film!

Next Move: Only Banerjee knows!

Pre-Release Status: Hot, totally in command of his craft, with a finger on the cinematic and musical pulse of the audience-that was Mohit Suri. Murder 2, Aashiqui 2 and Ek Villain were consecutive huge hits with popular music. Mohit's forte was his tight grip on desi emotions and strong scripts with powerful characterizations.

What Happened This Year: And this is why HAK came as a complete shock! How did Mohit even green-light this addle-pated, regressive script? Why was the music so much of a letdown? Yes, he scored on the performances, but where was the film going?

Next Move: He is said to be planning a film with hotshot Varun Dhawan. We suggest also a strong reinvention in music, and his having a free creative Ek Villain- like hand in an outside banner, rather than that of his uncles Mukesh and Mahesh Bhatt.

Pre-Release Status: He had developed a super reputation as a crack storyteller (A Wednesday!, Special 26) of sensible cinema that scored with the mainstream. The expectations from Baby were gargantuan, especially when producers T-Series agreed to make a virtually song-less film despite being the leading music label.

What Happened This Year: Baby's critical acclaim was higher than the people's endorsement, which even for an Akshay Kumar film, did not touch the magical Rs. 100 crore in India. Of course, the absence of music might have made a small difference, but the main areas in which Neeraj failed were in making a cold, emotion-less drama with a flawed script that did not have true dramatic highs and was more like a superhero-based comic book. Sadly, even the main villain was a weak, plastic character, and that counted negatively too.

Next Move: We hope Neeraj's talent will help him return to form with his next: M.S. Dhoni: The Untold Story.

Pre-Release Status: Remo made his directorial debut with F.A.L.T.U., an average grosser that had elements similar to 3 Idiots. But his main triumph was the first ABCD-Any Body Can Dance, which was the sleeper hit of 2013.

What Happened This Year: ABCD2 rode on the brand, was bigger, but the script was not as good. Neither was the music. But the dances that were filmed with 3D attracted children and the youth into the halls in hordes. And it had the biggest opening of the year and a terrific weekend with a good post-weekend as well.

Next Move: Remo should avoid another installment of this film. He is now making a different film, which is welcome.

Pre-Release Status: Sircar's gloomy Madras CafÃ© (2013) floored critics but missed the bus in audience likes. Before that, his 2012 ace Vicky Donor was hit enough to erase the memory of his distant dark debut Yahaan in 2005. But with every film, Shoojit showed his mastery over authentic representation of the diverse regions-Kashmir, Delhi, Sri Lanka and Bengal.

What Happened This Year: Piku 'piku'ed up by word of mouth like Vicky Donor to emerge as a huge Hrishikesh Mukherjee-like heartwarming hit. The USPs were the actors who outdid themselves, the script and the terrific dialogues.

Next Move: Nothing declared as yet, but we hope he sticks to comedy.

What Happened This Year: Thanks to Varun, the music and the powerful script and direction, Badlapur became Sriram's-and 2015's-first success. It was also critically praised.

Next Move: The director is working on a script based on The Accidental Apprentice.

Pre-Release Status: Zoya started out with the flop Luck By Chance but scored at the box-office with Zindagi Na Milegi Dobara.

What Happened This Year: Dil Dhadakne Do took off despite largely negative reviews because audiences simply loved the light, feel-good film with some big stars, exotic locales (as in ZNMD) and nice messages pertaining to day-to-day relationships with everyone important to us. This time, Zoya also went mainstream with a vengeance.

Next Move: The ball's in Zoya's court!