After the interesting teaser, Excel Entertainment who has come on board to present the upcoming film KGF in association with AA Films has unveiled the posters of the film. The magnum opus would be released in multiple parts and now the makers have introduced the audience to the first chapter of the film series by releasing a glimpse of the same. Here’s the first poster of KGF aka Kolar Gold Fields. 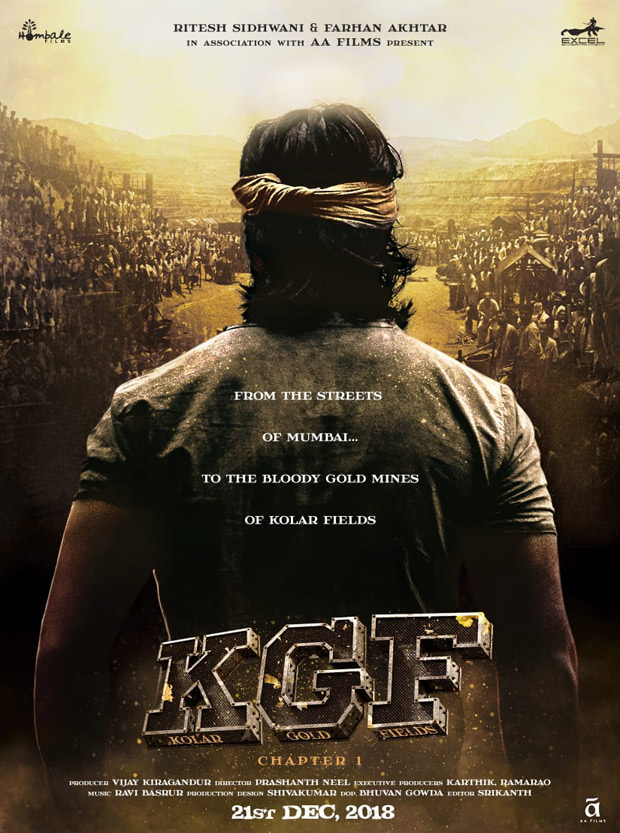 The poster features Yash showcasing his back in a rooted avatar standing against the backdrop of a village. The film would be tracing the journey of this man from the streets of Mumbai to the bloody gold mines of Kolar fields.

Excel Entertainment has joined hands with AA Films to present Kannada's most expensive & ambitious project KGF. The much ambitious project would be released in four languages- Hindi, Tamil, Telugu, and Kannada. KGF will also be dubbed in Chinese and Japanese.

Starring Yash, Srinidhi Shetty, Ramya Krishna, Ananth Nag, John Kokken, Achyuth Rao in the lead, KGF is a Homabale Films production directed by Prashanth Neel. It is produced by Vijay Kiragandur while Ravi Basrur has composed the music for the film.

A source confirmed the same saying, “KGF would mark Excel Entertainment's first Kannada venture and the production house is elated to be associated with a mega ambitious project as such.” The period drama traces the tenure of late 70s and will be made in two parts. The first of which will be titled KGF Chapter 1 and that is slated to release on December 21, 2018.