Marvel’s 2020 lineup includes The Eternals which is currently under production. A few days ago, some leaked photos from the sets of the film revealed that Game Of Thrones star Kit Harrington was shooting scenes with Gemma Chan in England. Now, a new set of photographs have shown them sharing a passionate kiss. 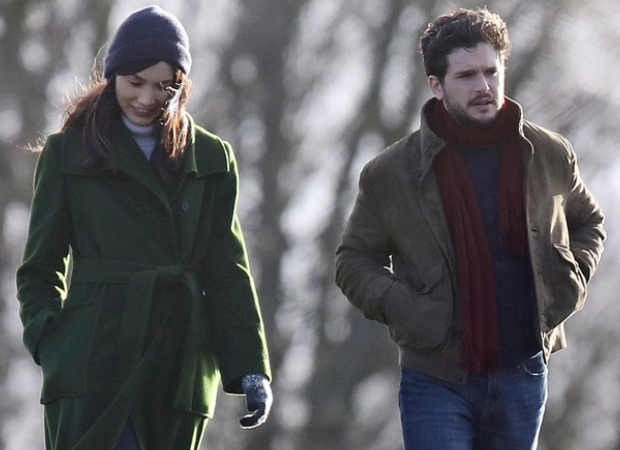 The leaked photographs from the sets of the Marvel which appear to confirm that they'll explore the romantic relationship between Dane Whitman (Kit Harington) and Sersi (Gemma Chan). The two of them, who were shooting in England, shared a kiss while filming.

In comics, Black Knight and Sersi were romantically involved but didn't last long. It seems like this film might establish a comic book romance.

“Marvel Studios’ The Eternals features an exciting new team of Super-Heroes in the Marvel Cinematic Universe, ancient aliens who have been living on Earth in secret for thousands of years,” begins the Eternals synopsis. “Following the events of Avengers: Endgame, an unexpected tragedy forces them out of the shadows to reunite against mankind’s most ancient enemy, The Deviants.”

It seems like we’ll meet The Eternals post-Avengers: Endgame which is in the year 2024. The supervillains The Deviants were created by the Celestials and terrorize humanity.

The film stars Angelina Jolie as Thena, Salma Hayek as Ajax, Richard Madden as Ikaris, Kit Harington as Black Knight, Kumail Nanjiani as Kingo, Lauren Riddlof as Makkari, Don Lee as Gilgamesh and Brian Tyree Henry as Phastos. The Eternals will be the next superhero team that will release in November 2020.