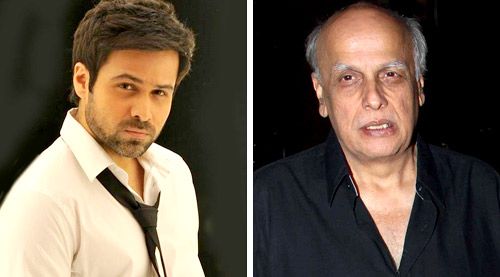 'Gratitude is the life blood of any meaningful relationship. I am grateful to Emraan for giving his best to us. But is his

It is this very tweet that started it all for Emraan Hashmi, just when he was gearing up for the next leg of Raja Natwarlal promotion. With

However, with a week long war that is continuing on Twitter till today, it has only ended up diluting the whole 'issue' all the more.

The general belief is - 'This is all as a publicity stunt for Raja Natwarlal!'

There are good reasons behind that, the prime most one being the people involved. Bhatts have never been known to adopt a subtle approach

when it comes to PR and marketing of their films. 'Jo dikhta hai, woh bikta hai' is what they have propagated for decades now and given their

(good) equation with Emraan Hashmi, this one just comes out of the blue.

shooting & do PR for Raja Natwarlal! - you know that the point has come well across that it is all about bringing both films of their family

member and protÃ©gÃ© into news.

Knowing Emraan, the man behind the keyboard is definitely not him. For someone who is known for his impeccable manners and a

non-controversial stance on matters both personal and professional, this is just not his pen talking. Hence, when there are a flurry of Tweets from

happy :)', you know for sure that somewhere in Vishesh Films' office or Emraan Hashmi's living room, the men involved are smiling it all away on a

cup of tea or a glass of wine.

'Hota hai, chalta hai, duniya hai' appears to be a clear mandate on line for Raja Natwarlal and even though Mahesh Bhatt may scream

around loud - 'Don't fear the enemy that attacks you, but the fake friend that hugs you. Is Emraan 'Natwarlal' Hashmi listening?', the message is

more for those who are waiting to catch the next con film of the 'Serial Kisser' instead of the subject in question.

No wonder, subtlety is the last of the things in mind of those driving the promotion and marketing of the film as it has become all the more

blatant with film's dialogues being posted on Twitter, when they carry a double meaning of a message being passed w.r.t. Emraan-Bhatt battle.

hai. Asli Tarakki usse kehte hain', you indeed feel whether the thin line between real and reel life is being erased here with nothing left to

indeed wrong between the two, would there be anyone who would have any doubts whatsoever to see the two hugging away to glory in full

statements on the lines of - 'There are no permanent enemies and friends in the industry. Everyone eventually comes back and since we are

related by blood, in any case there wouldn't have been any other way out'.

Oh yes, of course, even as Bhatt's statement of 'Brand Emraan stands on the bedrock of Vishesh Films. We have huge emotional investment in

him. He can run from this fact but not hide from it' is currently getting a counter-attacked, it is also complimented by 'Its funny how sometimes

the people you'd take a bullet for, are the ones behind the trigger'.

Well Bhatt saab, good that all of this has managed to bring the film into news, and in a big way of course. Now if only the tweets would have

come with the disclaimer of 'Advertisement', there would have been added authenticity indeed!

Remember, how the word 'Advt.' was missed out a couple of decades back when a leading afternoon newspaper had carried a front page story of

'Manisha Koirala murdered'. While it insisted that the 'murder' has taken place in 'broad daylight' at her residence and the 'post-mortem' too had

'revealed' that 'a heavy iron rod had been used for the gruesome murder', shocked readers got a clarification a day after that it was all publicity

Incidentally in the Nagarjuna starrer, Manisha Koirala was bludgeoned to death!

Disclaimer: All tweets have been re-produced from Mahesh Bhatt and Emraan Hashmi's account as-is.