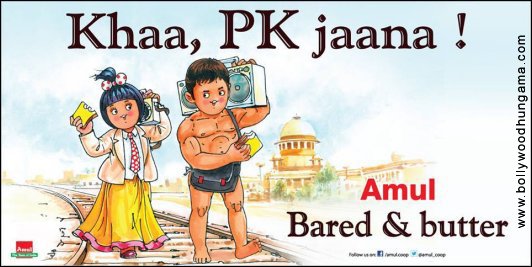 They say that 'Imitation is the best form of flattery'! And when it comes to 'imitation'... we mean, 'flattery', who better than the milk major Amul can do better, through its quintessential cartoons.


Ever since Aamir Khan's almost-nude poster of his upcoming film PK was out, it not only gave rise to a million controversies, but also to a whole bunch of 'spoofs'! Well, if we had our way, then, we would have given the prize of the best spoof to none other than Amul, for having come up with its trademark caricature of its Amul girl alongside Aamir Khan's character carrying a bag and the controversial tape recorder while eating bread (with Amul butter of course). The ad also carries the slogan 'Khaa, PK Jaana' (with) 'Amul: Bared And Butter'!