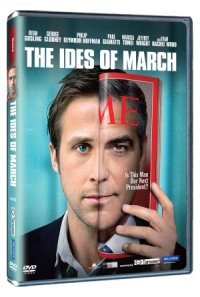 The Ides of March is a gripping, edge of the seat political thriller directed by one of the finest talents in Hollywood- George Clooney. Set in Ohio in the period leading up to the Presidential elections, the film essentially talks about the dirty games people play in politics. The film has a host of characters but none more impactful than Stephen Meyers (Ryan Gosling) who plays an idealistic but ambitious press secretary to Governor Mike Morris (George Clooney). Also part of Morris' campaign team is his veteran campaign manager, Paul (Philip Seymour Hoffman). Morris' rival in the Presidential Election is Senator Pullman (Michael Mantell) who also has a strong yet shrewd campaign manager in the form of Tom Duffy (Paul Giamatti). Things take an ugly turn when Stephen in a moment of weakness has a secret meeting with rival camp manager Duffy. One thing leads to another and Stephen finds himself out of Morris' team. Moreover his proximity with an intern Molly (Evan Rachel Wood) reveals some dark yet disturbing secrets which threaten to turn his entire world upside down.

The Ides of March is a film that keeps you guessing on what's going to happen next and there in lies its brilliance. George Clooney displays yet again that he has all the trappings of a fine filmmaker. His greatness stems from the fact that he manages to extract wonderful performances from each and every member of the cast.

Ryan Gosling is brilliant as a person caught in a scheme of things he never expected to be a part of. Clooney himself displays class and panache in a role tailor made for him. Veterans like Paul Giamatti and Philip Seymour Hoffman are needless to say ever reliable. The ladies Marisa Tomei and Evan Rachel Wood too do complete justice to their roles.

The film's duration is 101 minutes

The Special Features section consists of 2 short segments as follows:

Believe in George Clooney- An interesting segment where the cast including Ryan Gosling, Paul Giamatti, Philip Seymour Hoffman and Evan Rachel Wood speak about their experience working with director George Clooney. They say that they completely believed in Clooney's vision from start to end and knew that he wouldn't let them down.

Campaign with the Cast and Crew- Producer-Director George Clooney along with writer Grant Heslov takes us through the casting process, how they went about selecting each actor for their respective parts. Clooney also talks about how managing both acting and directing is never an easy job.

The Ides of March is a gripping political thriller that keeps you on the edge of your seats with its numerous twists and turns. With stellar performances from its entire cast and some brilliant direction from George Clooney, this one is an absolute must-watch.