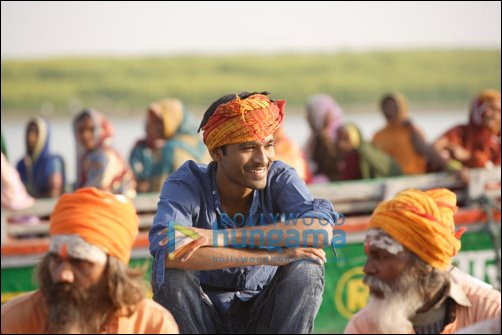 As the 'Kolaveri Di' star Dhanush prepares to play the Romeo in the gallis of Varanasi for Aanand Rai's Raanjhanaa, the Tamil actor struggling hard to grasp the bhasha and the culture of the region, has found an unlikely ally in Sunny Deol.

The reclusive Deol, lately staying completely out of the media glare, has quietly gone and shot in as many as 90 river banks of Varanasi for Dr. Chandraprakash Diwedi's Mohalla Assi without a single member of the mob causing a murmur of interruption.

Dhanush on the other hand, is yet to get a grip on the crowds, culture and ambience of Varanasi. Says a source close to Raanjhanaa, "Aanand had planned to shoot his protagonist Kundan's introductory scene on Maha Shivratri. Dhanush as Kundan plays a Shiv bhakt. And Aanand wanted to shoot Dhanush chasing a bull with the chant 'Har Har Mahadev'. Unfortunately, the possibility of the crowds being unmanageable prevented the shooting."

We now hear Dhanush intends to meet up with Sunny Deol to get a better grip on the pulse and nerve-centre of Varanasi.

Says the source, "Sunny has shot three of his films Raj Kumar Santoshi's Ghatak, Samir Karnik's Yamla Pagla Deewana and now Dr. Chandraprakash Diwedi's Mohalla Assi in Varanasi. By now Sunny knows the people and gallis of Varanasi like the back of his hand. Dhanush and his director have now decided to get Sunny Paaji's opinion on how to manage the volatile vibrancy of Varanasi."

While Sunny chose not to comment, we spoke to director Chandraprakash Diwedi who says, "Sunny has a very loyal fan following in Varanasi. I've also shot some of my most precious work in the city. We have a certain amount of credibility in the city. The population of Varanasi knows we'd never malign or misrepresent their city. We shot in the most crowded places of the Holy City. But there was no trouble at all. Of course there were crowds. How can there not be, when Sunny Deol is involved in a shooting? But not once did we encounter any situation even remotely disruptive."

Dr Diwedi says he and Sunny would be happy to brief any film unit desirous of shooting in Varanasi. "So many films to be shot in Varanasi have been announced recently .We're very happy. And we'd be most willing to share our insights into Varanasi with anyone who wants to shoot there."

Dhanush will be meeting Sunny shortly. Maybe he can teach the Deol a few of the Kolaveri steps in return for the Varanasi gyan shared by the senior actor.