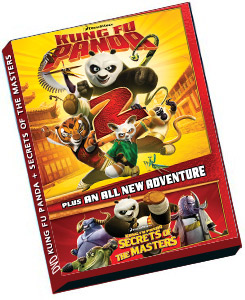 After the super-hit Kung Fu Panda, director Jennifer Yuh once again brings us the adventures of Po-The Dragon Warrior and the Furious Five in the hilariously entertaining sequel Kung Fu Panda 2. The story begins when Po (Jack Black) and his team comprising of Tigress (Angelina Jolie), Mantis (Seth Rogen), Monkey (Jackie Chan), Viper (Lucy Liu) and Crane (David Cross) realize that they have a new enemy to fight who is all set to destroy the peace in Gongmen city through a powerful weapon that could very well put an end to Kung Fu. The enemy in question is the cunning peacock Lord Shen (Gary Oldman) who wants to take complete control of Gongmen and eventually the whole of China. Po meanwhile, is also fighting his own inner battle, which threatens to question his very existence. He is on a mission to find out answers to how he arrived in this world and if Ping (James Hong) is his real parent. How Po and the Furious Five join hands in conquering the evil Lord Shen and how Po finds his Inner Peace forms the basic premise of this entertaining animated flick.

Just like the first part, Kung Fu Panda 2 too scores top points for its visual effects and quality of animation. The stunt sequences are brilliantly choreographed and couple of chase sequences leave you gasping for breath. Among the actors, its Jack Black once again who plays Po like only he could. Bringing in his own irreverent brand of humour through quirky one-liners Black is simply first rate. Among the Furious Five, it's Angeline Jolie as Tigress who gets the meatiest of roles and does complete justice to her character. Dustin Hoffman is his usual self playing the wise old Master Shifu while Gary Oldman hits all the right notes delivering a flawless performance as the voice of evil Lord Shen. The film ends in such a way that fans can look forward to the 3rd part in this super-entertaining franchise

The film's duration is 86 minutes

Kung Fu Panda comes in a collector's edition 2 DVD pack and is loaded with Bonus Features. Here's a snapshot of what you are likely to see:

Kickin' it with the Cast

A brilliant 12 minute look at how the cast got the perfect voice required for the various characters. The way Jack Black records his voice for Po in the dubbing studio has to be seen to be believed. The irreverence and improvisation which Black brings to the character is simply amazing. The segment also features interviews with other members of the cast including Angelina Jolie, Dustin Hoffman, Seth Rogen, Gary Oldman and James Hong. Director Jennifer Hu also comments on how she feels so lucky to have the best actors on board for the Kung Fu Panda franchise. Gary Oldman too reveals what thought process went behind getting the perfect voice of the cunning peacock Lord Shen.

Secrets of the Masters

A never seen before short film in which Po gives Tigress and Mantis a background on how the three greatest Kung Fu Masters- Master Croc, Master Ox, Master Rhino came together to fight the Wu Sisters. This one makes for an entertaining watch with brilliant animation and some edge-of-the-seat Kung Fu action.

This section features just 3 deleted scenes which are pretty ordinary but what makes this section stand out is that the deleted scenes are presented in storyboard format making one assume the scenes were never shot and got chopped off at the pre-production stage itself.

This section contains trailers of some of Dreamworks' best known animated flicks including Shrek, Madagascar, Megamind and How To Train Your Dragon

A look at the animals that inspired Kung Fu Panda and footage of Jack Black's visit to the Atlanta Zoo to meet Po's real-life namesake.

Yet another interactive feature where you get to learn 50 Kung Fu Panda-inspired words in Chinese.

Kung Fu Panda 2 DVD delivers more than what one expected both in the terms of the film and especially the Special Features section. It's a must have for all fans of the franchise and as Po would say it this one is 'Sheer Awesomeness'.

Will the audience get good films at…