Siant Dr. Gurmeet Ram Rahim Singh Ji Insan, popularly known as Dr MSG, is happy with the audience's reaction to the trailers and promos of his upcoming release, Hind Ka Napak Ko Jawab. Two songs from the film, 'System Hil Gaya' and 'Na Dharam Se Na Jaat Se, Na Desh Jihad Se, Jung Hai Meri Atankwad Se' have especially been appreciated. Fans have been flooding Social Media, with their selfies on ‘System Hil Gaya’. This Song has already become a rage amongst the Fans and is turning out to the next party anthem. On the occasion of Valentine’s Day, the rockstar Saint has tried to capture love and romance and every frame showcases this beautiful emotion perfectly. Being a versatile singer, he is already on the wish list of every music director after receiving appreciation from numerous reputed singers who have complimented him for ‘System Hil Gaya’. 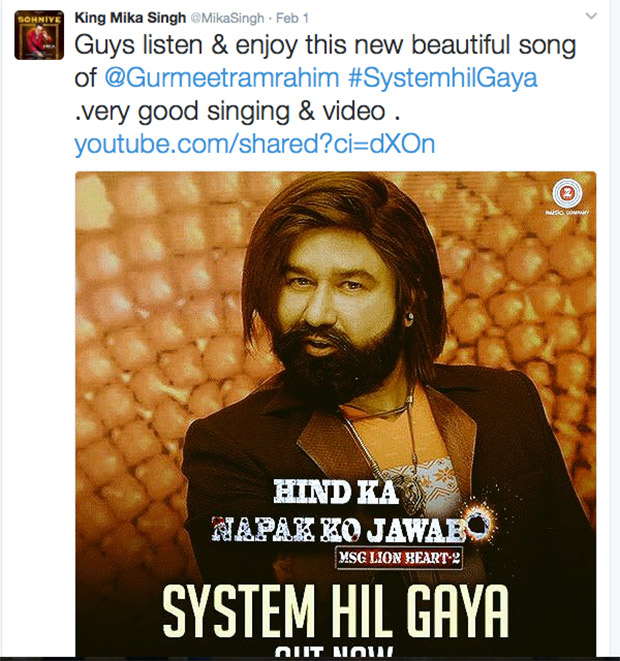 And as a composer too, he has worked wonders for Hindi film music via MSG series and his lover-boy act in this romantic number ‘System Hil Gaya’ from Hind Ka Napak Ko Jawab is making masses drool over him. And its previous song, ‘Jung Hai Hamri Aatankwad Se’ too has found a place on the top charts on music lists of the season. What’s adding to the excitement is Saint Dr. MSG’s younger daughter, Amarpreet Insan’s voice and her enigma to sing a duet with her own father.

The film also sees his daughter Honey Preet Insan, who plays a pivotal role in it; perform some tough stunts without using any body double. Dr. MSG has around 43 credits in the film right from direction, acting, screenplay, dialogues, music direction to prop designing, set designing etc. While his daughter has 21 credits ranging from acting, direction, costume designing, to assistant publicity designer, colourist etc. The story revolves around India's recent surgical strike on Pakistan. Directed by Dr. MSG and co- directed by Honey Preet Insan, the movie is set for an all-India release on February 10.