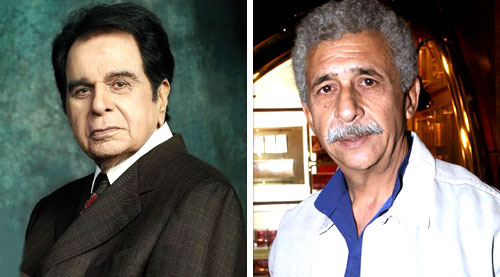 Subhash K Jha talks to Naseeruddin Shah on the imperativeness of more collaboration between the two countries.

How was your most recent visit to Pakistan?
Very, very satisfying. I attended the Lahore Literary Festival. Then I went to Karachi for the launch of my memoir.

We seem to appreciate each other's country only on the cultural level?
It is tragic that often-times performers from Pakistan are prevented from performing in this country. Recently, there was a very disturbing instance of a Pakistani artiste's work being destroyed in Ahmedabad. But they welcome us in Pakistan with open arms.

And you visit quite frequently?
I keep going to Pakistan because; I feel it is very important to have a person-to-person contact. We can't afford to be swayed by all the political rhetorics. Politicians will change colours whenever it suits them. Indians are being brainwashed into believing Pakistan to be the enemy country without being aware of the historical background.

You see the need for more interaction?
The tragedy of the political divide between the two countries is symbolical. It should go. That would never happen until we travel to Pakistan more often and interact with the local people. There is a great deal of curiosity and admiration in Pakistan for what India has achieved.

And adulation too I believe?
Dilip Kumar is like God in Pakistan. They don't adore any of their own cultural icons much as they adore Mr. Dilip Kumar. So, I really think it's important for Indian artistes to visit Pakistan. I was very happy to hear Raj Kumar Hirani was planning to visit Pakistan.

His jadoo ki jhappis should help?
(laughs) Yes, they are very important.

You visit almost every year?
I go there each year to perform in the memory of Faiz Ahmed Faiz. I've also done two Pakistani films Khuda Kay Liye and Zinda Bhaag. And, I'm very proud of both. I hope to act in more Pakistani movies. I met some young filmmakers in Pakistan who want to make films away from the beaten path. They are troubled by the state of affairs there. The young generation of Pakistan is very, very bright. And they are not taken in by the hate logic of politicians or the army.

Do you think we need to look beyond the political animosity?
I'd make a very strong appeal for that. And this has nothing whatsoever to with my being Muslim. What can we possibly gain from this form of ragging that we practice against Pakistan? It is a bully's way of asserting himself. They are next door neighbors. When I go to Pakistan and I hear that 25 percent of their population migrated to India, whereas only 1 percent of Indians went to Pakistan... when I got to know that before 1947, 95 percent of Karachi spoke Sindhi whereas in 1948 only 2 percent of the population spoke Sindhi it's heartbreaking.

Were you surprised by the warm reception accorded to your memoir in Pakistan?
Actually, I expected it. They love me unconditionally in Pakistan. They are nuts about our stars like Salman and Shah Rukh. But I also sense a reverent affection in Pakistan for actors like me, Om Puri and Farooq Sheikh. I feel very special in Pakistan. So, I did expect a warm response to my book in Pakistan. But, I didn't expect such a warm response to it at home in India.