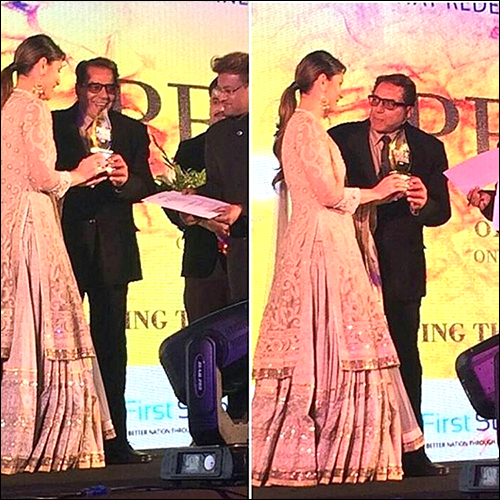 Dharmendra presented Kareena Kapoor Khan with a bouquet which she graciously accepted it from the legend himself. The actress chose to go ethnic with a beautiful heavy work outfit, traditional jewellery and side-parted ponytail. While the actress expressed about how honoured she was to receive the award, she also shared her excitement about receiving the same from a veteran and a superstar like Dharamji.

The actress also took the platform to refute rumours regarding her pregnancy that has been doing the rounds in media for quite some time now. On the work front, Kareena who was last seen in R Balki's Ki & Ka opposite Arjun Kapoor is gearing up for the release of the controversial Udta Punjab starring Shahid Kapoor, Alia Bhatt and Dilijit Dosanjh.