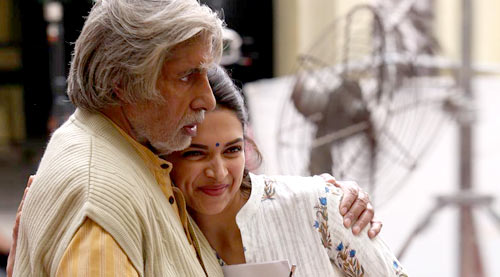 Shoojit Sircar's Amitabh Bachchan-Deepika Padukone-Irrfan Khan starrer Piku has a lot of Satyajit Ray in it.

The film, a father-daughter story, derives its title from Satyajit Ray's short film Pikoo's Diary. Shoojit is, in fact, making a diary-like record of all the incidents and happenings during the shooting.

"For example, the first day of shooting was magical. India's greatest star with our most internationally celebrated actor, together with the actress who's at the moment doing her best work...I felt blessed. I have the first day's shooting and the other important happening on the sets on camera."

One reason why Deepika Padukone bagged the role of the Big B's daughter in Shoojit Sircar's Piku is because she actually seems like his daughter.

Admits director Shoojit Sircar, "We didn't really think about it. But it's true. At the time of casting I instinctively knew Deepika was the right choice to play Amitji's daughter. My hunch was right. She actually looks and feels like his daughter."

Apparently, the actress who lately came into her own spent considerable time getting familiar with the script and characters.

"We were all new to one another, especially Irrfan Khan. He was working for the first time with Amitji, Deepika and me. All three main actors spent time gauging their own characters and that of the other two. Very soon they felt like a family," says Shoojit, adding he was bowled over by Deepika's dedication.

"She surrendered completely to the role. We completed Piku in record time as we had bulk dates of three of the busiest actors of the country," says Shoojit gratefully.

Piku is a quirky comic father-daughter story. "It's a film filled with sunshine. I am sure the audience is wondering what I am up to. Doing the unexpected comes naturally to me. That's what I did with Vicky Donor. I can't be repetitive. Piku is a quirky comedy, the kind that will bring sunshine to the audiences' heart."

The music is composed by Bollywood debutant Anupam Roy. Shoojit is looking at an April 30 release.