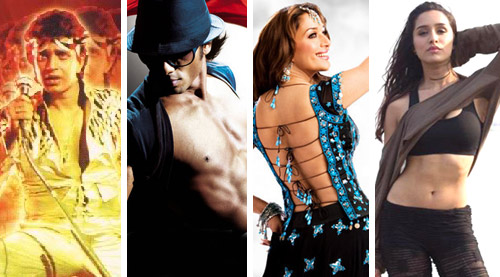 1. Disco Dancer (1982): Mithun Chakraborty's iconic dance film about a wedding entertainer who turns into disco king. The songs (Bappi Lahiri) and Mithun's gyrations ensured a historic run for this B. Subhash directed tribute to tackiness.

2. Dance Dance (1987): More like Dunce Dunce. And what was a heavily pregnant Smita Patil doing playing Mithun's sister? Attempts to repeat the Disco Dancer success ranged from the weird to the pathetic.

3. Jal Bin Machli Nriyta Bin Bijli (1971): The director V Shantaram's wife Sandhya played a woman obsessed with dance and dancing to the point of self-destruction. The passion and zeal for the art was expressed through Lata Mangeshkar's immortal songs composed by Laxmikant Pyarelal.

4. Naache Mayuri (1986): A rare instance of a dance film where the protagonist was enacted by the character on which she was based. Sudha Chandran played herself, a danseuse who continues to dance even after losing a leg. Though the real interpretation was nowhere as poignant as the real, the semi-classical songs sung by Lata Mangeshkar and composed by Laxmikant-Pyarelal carried the film forward.

5. Chance Pe Dance (2010): Shahid could dance and dance. And then dance some more. But there was very little else to recommend this Ken Ghosh-directed naach-fest.
6. Naach (2004): So okay. This was Ram Gopal Varma's experimental dance film with Antara Mali not only performing but choreographing some of the most intricate and complex dance movements ever seen in Hindi film. This was a far more interesting dance film than the most. Again, like most dance films, a flop.

8. Dil Toh Pagal Hai (1997): A rare success in the dance genre, this one was about Shah Rukh Khan and Karishma Kapoor leading dance troupe. All is fun and fab until Madhuri Dixit saunters in. Innovative choreography by Shiamak Davar.

9. ABCD (2013): Remo D'Souza redefined the dance genre with this film about a group of sassy dancers finding their bearings. Too cool.

10. ABCD 2 (2015): Sequel to the 2013 film with much more of everything including stunningly choreographed dance numbers. Hit hop.

5 times Bollywood men had us in awe with the…