We all know about how fond Mamu Salman Khan is of his nephew Ahil Sharma. In fact, Arpita Khan’s son has remained to be Khan-daan’s youngest and favourite. So his birthday was no short of a festival and the Khan family ensured that it is celebrated in a grand manner. The birthday bash was held at the plush Panvel farmhouse of the Khans and was a carnival themed celebration. 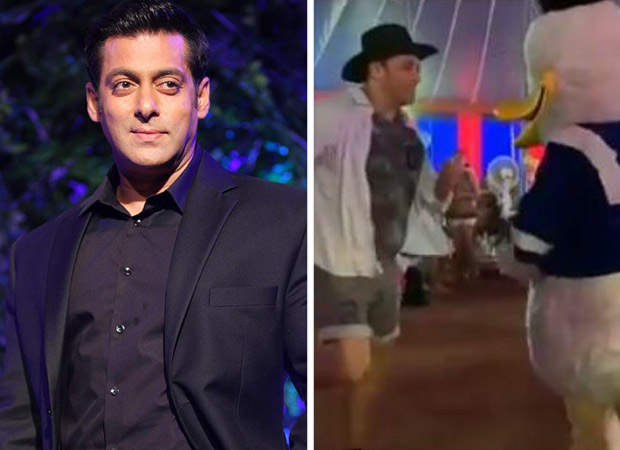 From life size Donald Duck and other cartoon characters to Avengers themed cake, the celebrations had a lot of interesting elements. What attracted our attention was actually this video of Salman Khan dancing. The actor, who has won hearts by dancing to the tunes in Bollywood films, was seen having a gala time at his nephew’s birthday bash. Knowing the love that the superstar shares for children, it came as a no surprise that he thoroughly enjoyed himself. He even went on to do the famous floss dance with the cartoon characters like Winnie The Pooh who were present there.

While Salman Khan fans can’t stop gushing about Bhai and his dancing skills, we found another set of videos doing the rounds on social media. We got a glimpse of the large Avengers themed cake that was ordered for little Ahil who cut the same along with his mother and father. Later, Salman was also seen fondling sharing a piece with his nephew.

On the work front, Salman Khan kicked off Dabangg 3 which also features Sonakshi Sinha, Sudeep in integral roles. The film will be directed by Prabhu Deva this time and is produced by Arbaaz Khan. The film went on floor today, that is on April 1, in Indore.