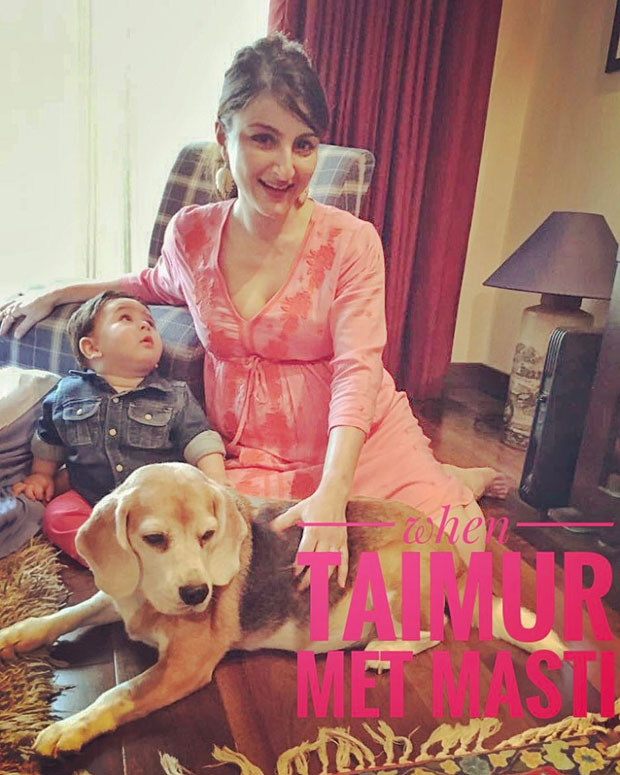 Soha Ali Khan is high on celebrations, courtesy, all the love and best wishes she received during her recent baby shower. The actress, who looked beautiful during the function, interacted with her friends, indulged in some yummy cupcakes and loved to have her friends and family around as she spent some quality time with them too.

Earlier, we had seen pictures of Soha Ali Khan having fun at her brother Saif Ali Khan’s birthday celebrations with sister-in-law Kareena Kapoor Khan and also Saif’s kids Ibrahim and Sara. While we did not spot Taimur then, it seems that our little guest was a part of his aunt Soha Ali Khan’s baby shower celebrations and a photo shared by the actress is a proof of it.

We received glimpses of Soha’s baby shower where we saw the actress’ friends showering their love on her as well as the Kapoor sisters in colour coordinated outfits bonding with the mom-to-be. Amidst pictures shared by the actress on her Instagram page, what caught our attention was this adorable moment that was captured between Soha and Taimur. Posting it on the platform, Soha captioned it saying, ‘And finally my favourite picture of the day’.

Ever since Taimur was born, he has become a star in media but it seems that the toddler has made his way intoo everyone’s heart in the family and has become an apple of their eyes.

As for the baby shower, going by the pictures, it seems that everyone including the mom-to-be had a blast during the bash.