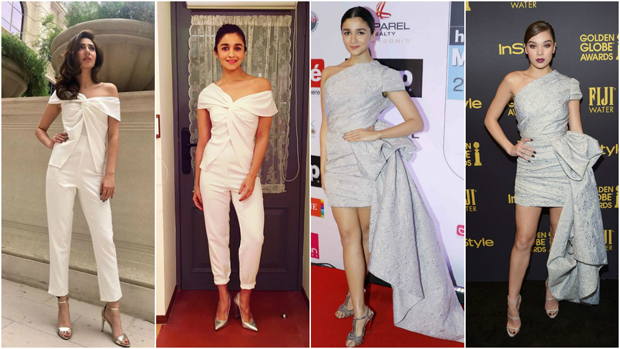 Over the years, with her brilliant performances, Alia Bhatt has also evolved in the fashion department. Be it on magazine covers or the red carpet, Alia Bhatt has always made sure to set a trend when it comes to age appropriate fashion.

It seems Alia Bhatt has also joined the club of donning outfits which other celebrities have already worn it. In the past weekend, everyone observed that Alia Bhatt made two appearances and wore outfits that were worn by other celebs.

On Friday, Alia Bhatt attended the Youtube Fanfest as Gionee’s brand ambassador donning a white pantsuit from Lavish Alice ensemble with silver Steve Madden pumps. She kept her makeup to a minimum and tied up her hair. Everyone noticed that it was the same outfit which was worn by Pakistani actress Mahira Khan during the promotions of her debut film, Raees. The only difference was she had left her hair loose with beachy curls and worn strappy heels. Although the styling was different, both the actresses pretty much looked similar in their approach.

On Saturday, at HT Style Awards which was held in Delhi, Alia Bhatt took the red carpet by storm in her glammed up avatar. Alia donned a Reem Acra outfit shimmery one shoulder outfit with a side trail which was from their Spring Sumer 2017 collection. Once again, she kept the makeup extremely minimal, strappy heels and tied her hair in a bun. Her outfit was exactly similar to Hollywood actress and singer Hailee Steinfeld. Recently, even she wore the same outfit with strappy heels and black nails. The side parted hair and dark lips made her look stand out in comparison to Alia Bhatt’s look.

What do you think? Who wore it better?