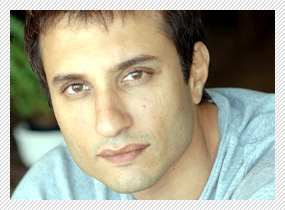 For anyone who's followed Homi Adajania's career and life, the fact that this charming personality has gone from a scuba diving, writing a book to making his debut film in English to making the most impossible task possible - making his first Hindi language film Cocktail, should come as no surprise. Yes, Adajania doesn't stick to type. Even so, I had to ask, one guy and two girls? Well, it certainly felt like a good contrast. Homi is the kind of man who'd order a beer and chips and would start talking to you about movies and life in general, and you'd come out post your interview and say, 'He is the nicest director in Bollywood'. Well, it's time the audience say just that for Cocktail has seen the light of the day. Homi talks about his wife and costume designer Anaita Shroff Adajania, his Hank Moody look, his attempt of surpassing Being Cyrus, Diana Penty, the 'Bawas' sense of humor and his ear for music in this Part 2 exclusive!


Your better half - Anaita Shroff Adajania is a fashion editor for a magazine. She is so creatively gifted I tell you!

Thank you! Anaita is immensely creative I feel. We both have this passion for very different forms of creativity. What she likes and I like is very different. She knows for the fact that I like to keep it real, unless, of course the script demands something out of the box. She doesn't go anywhere out of the characters parameters. She will see the character more than the actor. She is very well exposed. She goes travelling the world and follows the fashion seasons too and that exposure has made her all the more creative in her designing the costumes. Anaita is urban and contemporary and Cocktail demanded just that. It was bang on! For me as a filmmaker I am very particular about hiring the right technicians and then letting them do their job.


From your pictures, I feel if you sport a stubble you'd look like Hank Moody from Californication.

(Laughs) Now I am going to shock you because I barely watch television (laughs). I love watching movies but not a mad fanatic. I am a big Pedro Almodovar fan. Back at home, I recently watched the trailer of Barfi and absolutely loved it and blown away. It's superb!

I don't think both my films can be compared. At that given point in my life, my mindset was different. I made Being Cyrus and today many think it's a cult film given its genre and storytelling. Cocktail is different and I make films with my gut. I don't try to compare it to what I've done before. The sensibilities I had for Cocktail are way different from my previous film. I genuinely feel the person I am and going by the extreme things I do in my life, I will surely be making different films all my life and that's for sure.

I'm sure you've gulped down many British 'Pints' of Beer more than Cocktails in London?

Oh yes! I have indeed. But yes, I am not a cocktail person. I'd rather 'pint' myself up (laughs). I loved gulping down Guinness in the many London pubs and when Randeep Hooda came, he made me try the Guinness Red which was a bit deadly (laughs).

Do you think the USP of the new debutant actresses is their vulnerability?

I can only speak of Diana Penty because I don't know others. I was sure that I wanted a girl who wasn't an actor. I didn't want any baggage with her in acting prowess. I wanted to exploit her youth and use that in her character. I felt she would have that natural finesse to her role. What impressed me about her was her versatility more than vulnerable. She had that rare maturity of staying pure to her character. For a newcomer to have these qualities is a bonus.

Bawa's have a great sense of humour and I hope you've taken a p*** out of Dinesh Vijan.

(Laughs) If you ask this to Dinoo (Dinesh Vijan) he'll probably say that by hiring, accepting and directing Cocktail, Homi has taken a p*** out of him (laughs).

What about your sense of music?

I love music. I am always wired in. For Cocktail, it was a very unique experience. I was very clear that Dinesh Vijan would take care of the music. So when he collaborated with Pritam, he would make me hear the scratches and he would go, "Ok, you have to listen to this scratch but don't worry, it'll not sound anything like this" and I'd go, "Oh really? Then what's the point listening to it?" (Laughs). Dinoo is a funny man. He was damn sure that 'Daaru Desi' will be a chartbuster and it is today. He wanted my take on how I would visualise the music and it has really worked well. The Cocktail songs have come from sheer cluelessness of what the final dub would sound like (laughs).