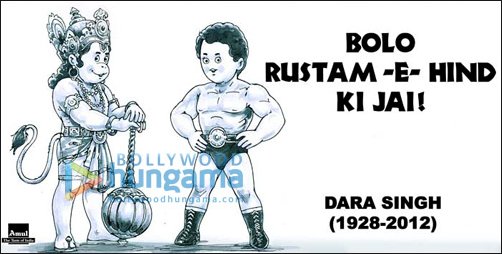 Just a couple of days back, after Bollywood lost its original 'He Man' Dara Singh, Amul was paid tribute to the late wrestler-cum-actor in their

own special way. Even though the late Dara Singh was bestowed with many titles like 'Rustam-e-Punjab' and 'Rustam-e-Hind', he will still be remembered for his epic

portrayal of Lord Hanuman from the popular television series 'Ramayan'. And this is exactly what Amul has tried to portray through their latest ad that has the late

Needless to say, a unique tribute to the legend.