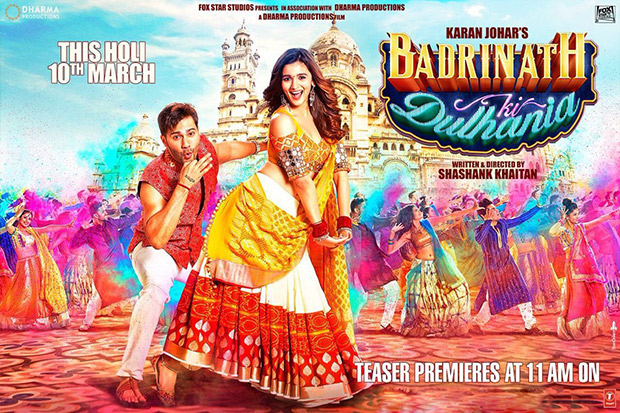 Varun Dhawan and Alia Bhatt have been teasing their fans for a while now ever since Badrinath Ki Dulhania announcement was made. The fan favourite on-screen pair is reuniting for this romance drama with some comic element.

While the fans are eagerly waiting to catch their chemistry on big screen, Varun Dhawan shared the first poster for their upcoming film. Posing along Alia Bhatt, the couple looks good in their traditional outfits while enjoying the Holi celebrations. The first teaser comes out today at 11 am. Varun wrote, "1st poster #BadrinathKiDulhania @karanjohar @aliaa08 @ShashankKhaitan #BadriKaTeaser at 11am!"

Badrinath Ki Dulhania is helmed by Shashank Khaitan who had made his directorial debut with Humpty Sharma Ki Dulhania which also starred Alia Bhatt and Varun Dhawan. The film is slated to release on March 10, 2017.