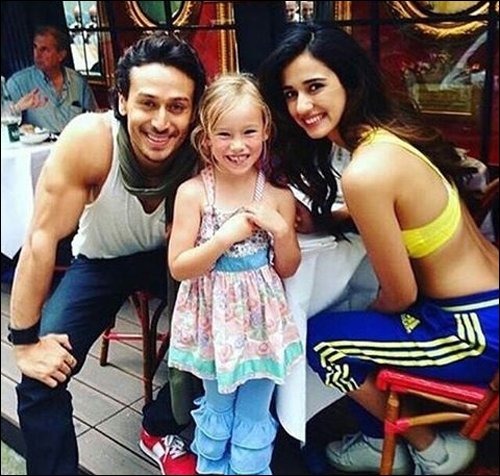 After Baaghi success, Tiger Shroff headed to Paris last week to shoot for a romantic music video where he will be starring opposite rumoured girlfriend Disha Patani. The actor has previously done few other music videos and one of them starred his Heropanti co-star Kriti Sanon.
During the shoot of their romantic number, Tiger Shroff was approached by a little fan who wanted to get clicked with him. The actor couldn't say no to the fan and was also joined by Disha Patani. The little girl was happy to get a picture with them.

Tiger Shroff will next be seen in Remo D'Souza's superhero film A Flying Jatt which is scheduled to be released on August 25, 2016. Disha Patani is gearing up for her Bollywood debut opposite Sushant Singh Rajput in Neeraj Pandey's M S Dhoni: The Untold Story.

Tiger Shroff releases the teaser of…