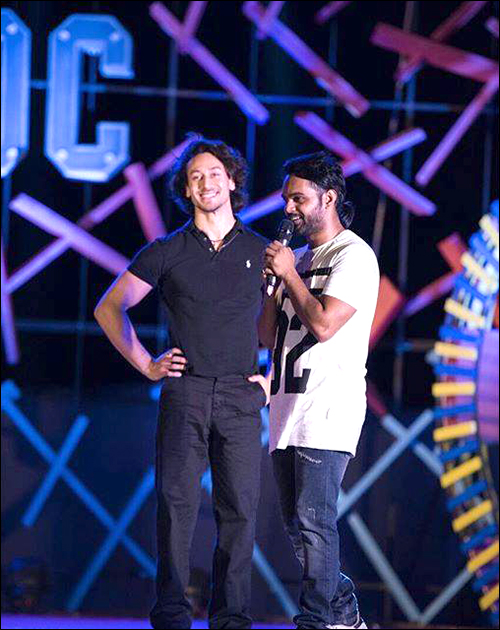 Tiger Shroff who recently gave another successful film with Baaghi, recently collaborated with choreographers Remo D'Souza, Prince Gupta, Terence Lewis and others to create a world record for the largest free dance camp for students.

Tiger Shroff became a part of United Indian Dance Camp and didn't even charge a penny for it. Prince Gupta from Dance India Dance fame, who is now a professional choreographer revealed that one fine day he approached Tiger with this idea of giving free dance lessons to over 2,500 students and all he has to do is come and be a part of this. Tiger heard this concept and got really excited about it.

Prince Gupta has choreographed some songs of Tiger Shroff like 'Zindagi Aa Raha Hoon Mai', 'Chal Wahan Jate Hai', 'Pappi Song' and recently worked together on two songs in Baaghi. He thanked Tiger for being a part of dance camp with a message, "Thanku so much @tigerjackieshroff for coming to UIDC @uidcofficial and encouraging the kids. I know all the kids are very happy that you came all the way for them. You are a very humble and a down to earth person. Please always be the way you are."

On the work front,Tiger Shroff will be seen in Remo D'Souza's superhero inspired film A Flying Jatt opposite Jacqueline Fernandez. It also stars professional wrestler Nathan Jones in lead roles and is slated to release on August 25.