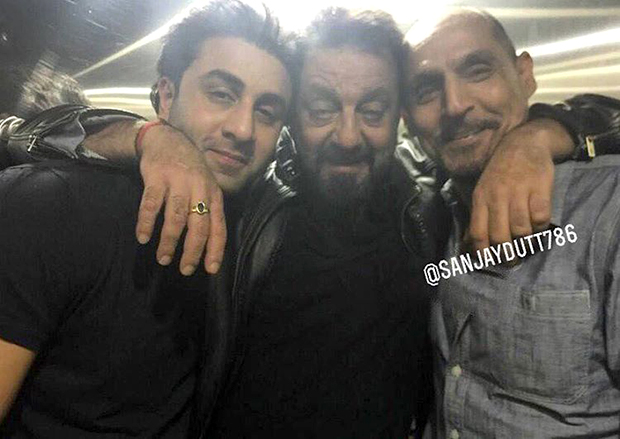 It's the era for biopics in the Hindi film industry. Every filmmaker is trying his hands on getting stories out in the world and what's better than a real life one. Everyone is aware of the fact that Sanjay Dutt was finally released from jail last year but a biopic on his life was in works since a long time.

As soon the actor gave a nod to the film, Rajkumar Hirani went ahead with the script. We had reported that Ranbir Kapoor is playing Sanjay Dutt in the film and recently commenced shooting for it. It turns out recently Ranbir got an opportunity to meet Sanjay and they looked quite similar. A photo of them meeting is a proof that Ranbir is doing everything possible to look very similar to the actor.

It has been learned that Ranbir has gained 13kgs of weight to show the older version of Sanjay Dutt. The biopic will show everything from his relationships to biggest controversy during the 1993 blasts to his kids. Helmed by Rajkumar Hirani, Sanjay Dutt biopic also stars Vicky Kaushal and Dia Mirza.