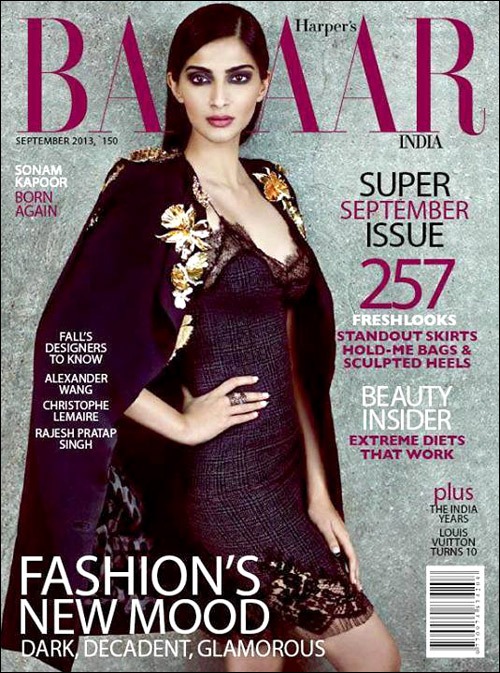 After having two back-to-back hits, Sonam Kapoor graced the September 2013 Harper's Bazaar's cover in a black Louis Vuitton tulle dress teamed with a sequined Ungaro blazer. Keeping up with the Ushering Fall theme which is dark and sensuous, the diva sported gothic makeup consisting of bold brows, smokey eyes and damp side-part tresses.


Groomed in a purple velvet balloon hemline Emporio Armani gown featuring a boat neck and accessorized with a beaded Blugirl neckpiece and Louis Vuitton ring, Sonam strikes a poses with a red rose in her hand.

In the current issue, Sonam talks about her career choices, how she managed to carve a niche for herself in Bollywood, her next few films and the list of directors she wishes to work with. Further talking about her choice of films, Raanjhanaa and Bhaag Milkha Bhaag, Sonam shares that she was in a space where she didn't wish to sign films just because there was a big hero in it, or because it was a project that was going to make 150-200 crore. The diva wanted to do a film if she liked the character, the script, and connected with the director.


On a philosophical note, the diva confesses that she has learnt that her life cannot be just about films. For her, it's about moving forward, becoming a better actor and a better person. It's about growing, learning and changing.