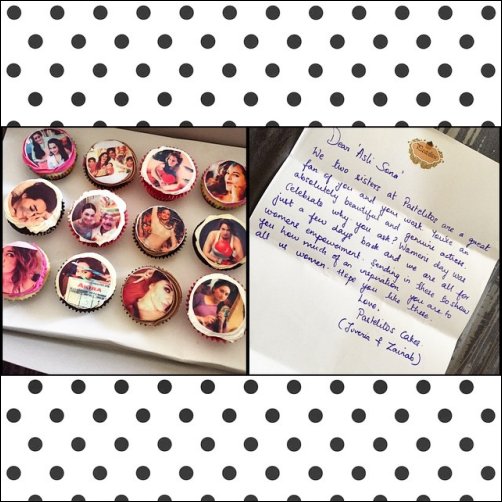 Bollywood celebrities have often spoken about the special moments in their life when their fans have showered their love and affection towards them. Recently, it was Sonakshi Sinha who was enthralled to receive a beautiful present from two of her female fans.


Juveria and Zainab, who own the 'Pastelitos' cake shop, sent a box of customized cakes for Sonakshi Sinha along with a letter where they appreciated Sonakshi Sinha and her work in films. The box of 12 cupcakes had pictures taken from Sonakshi Sinha's Instagram page starting from the actress' childhood to the ones taken with her parents to her popular film characters including the recent one where she is holding the clapper board of Akira to some cute selfies.

On the other hand, the letter written by the two girl fans stated that they not only respected her as an actress but also considered her as an inspiration to many women in the country.


Posting a picture of the cupcakes along with the letter, Sonakshi Sinha posted on her Instagram page saying, "OMG!!! How sweeeeeet!!! Thank U Juveria and Zainab for these amazing cupcakes and even sweeter letter! You guys just made my day #yummy #sweet #cupcakes #love." Adding further she posted, "Just look at that ya!!! They're so nice how to eat them @pastelitoscakes??? Too too sweet this is."