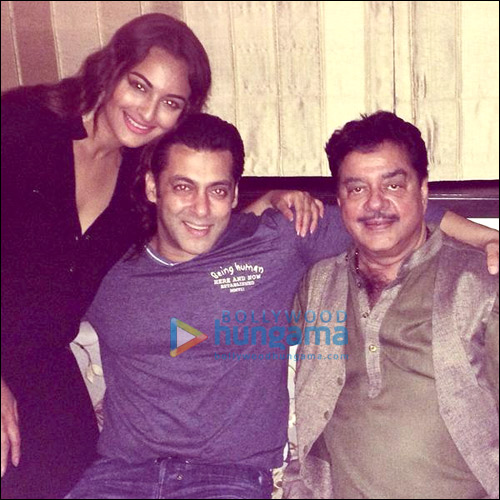 She may be one of the most sought after actresses in Bollywood but Sonakshi Sinha has always maintained that she is a complete family girl in real life. Being the daughter of Bollywood legend and the successful politician Shatrughan Sinha, this star kid, believes in spending quality time with her family. During Eid, Sonakshi Sinha was seen celebrating the festival with her father and their family friend and her mentor Salman Khan.


Sonakshi Sinha took to Twitter to post a lovely picture of the three superstars of Bollywood posing together, as she expressed her happiness saying, "Get your kick this eid!! Celebrations with @BeingSalmanKhan and @ShatruganSinha! Sonakshi has been an ardent fan of Salman Khan since her early days and also she shares a special bond with the actor since she debuted in Bollywood with the superstar in Dabangg. Hence the actress decided to promote Salman Khan's upcoming film Kick with her tweet.


Currently, Sonakshi Sinha is busy with many projects in hand and she will be soon seen in Action Jackson with Ajay Devgn, Tevar with Arjun Kapoor and A.R. Murugadoss' next produced by Fox Star Studios.


On the other hand, Salman Khan too took out time to meet his friend Sonakshi Sinha. The actor also shares a great rapport with Sonakshi's father Shatrughan Sinha.


After the stupendous success of Kick, Salman Khan is currently busy with films like Sooraj Barjatya's Prem Ratan Dhan Payo starring Sonam Kapoor, Kabir Khan's Bajrangi Bhaijaan starring Kareena Kapoor and he will be coming together with Karan Johar in Shuddhi after more than a decade post the popular Bollywood film Kuch Kuch Hota Hai, which marked Karan's debut as a director in Bollywood.