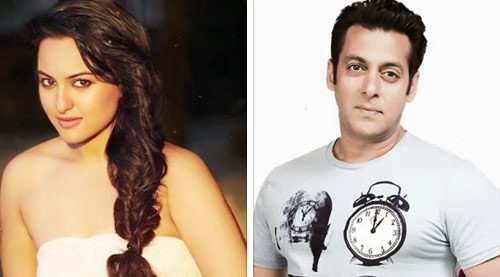 Amongst the leading ladies, Sonakshi Sinha reigns from the top with five centuries (100 crore films) to her name (Holiday, Rowdy Rathore, Son of Sardaar, Dabangg 2, Dabangg). On the other hand, Salman Khan is almost unassailable, what with seven centuries to his name now (Kick, Jai Ho, Dabangg 2, Ek Tha Tiger, Bodyguard, Ready, Dabangg).

Now all eyes are on whether Sonakshi Sinha would be able to match up to her male counterpart (who by the way started it all for her with Dabangg), what with Action Jackson and Tevar being her next two releases before the end of the year.

"While she leads from the front, Sonakshi's closest competitors (from the account of number of centuries to their name) are Deepika Padukone (4), Katrina Kaif (4), Priyanka Chopra (4) and Kareena Kapoor (4). At least Deepika (Happy New Year), Kareena (Singham Returns) and Katrina (Bang Bang) are assured of equaling Sonakshi's record of five centuries with their very next releases. Even Priyanka Chopra has a chance if her Mary Kom finds acceptance with good word of mouth, as was the case with Farhan's Bhaag Milkha Bhaag. However, the above actresses would have to wait a little for their fifth and the sixth centuries," says a source.

This makes Sonakshi's case stronger since she has two major films, both with Eros, with a 100 crore potential releasing in almost back to back manner before the close of year.

"Action Jackson is with Ajay Devgn and moreover it reunites her with Rowdy Rathore and R... Rajkumar director Prabhu Dheva. It is a biggie by all means. There would be hardly anyone who won't be betting for a 100 crore success here," an insider adds, "On the other hand, the stocks of Tevar have anyways gone higher with every passing month. Arjun Kapoor's acceptance as a saleable name after Gunday and 2 States has only spelled good news for producer Sanjay Kapoor who is set out to give the film a large canvas."

Considering the fact that newer filmmakers (Shashank Khaitan, Abhishek Varman) have only made Bollywood their playground with their Gen-X friendly treatment, it is pretty much expected that Amit Sharma (of the Google ad fame) has brought his own touch to Tevar.

While the films are expected for their own worth, their acceptance would hold all the more importance for Sonakshi Sinha who could pretty much continue with her reign from the top when it comes to the 100 crore hits.