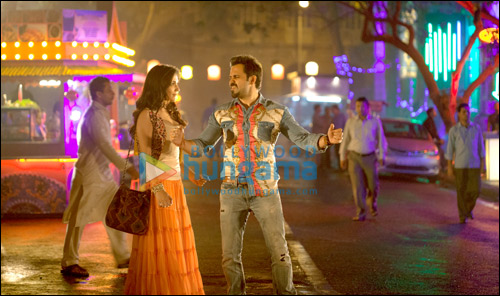 Emraan Hashmi is all set to sizzle the screen with yet another newbie after the sweet Sonal Chauhan (Jannat) and sexy Esha Gupta (Jannat 2). And this time around, his costar is Pakistani model and actress Humaima Malick in his upcoming film Raja Natwarlal. While the pictures of his sensational kiss with the actress are doing the rounds, we hear that Emraan Hashmi even grooved to the Katrina Kaif song 'Sheila Ki Jawani' (from Tees Maar Khan) in the film.


Apparently, in one of the scenes of Raja Natwarlal which was shot in Mumbai, when Emraan Hashmi was with Humaima, he broke into a jig to the song 'Sheila Ki Jawaani' and 'Am too sexy for you', to the utter amusement of Humaima Malick. Also, Emraan Hashmi shares a special liking for the song as it's one of his favourite item numbers. However, this was not scripted and something which Emraan did impromptu and suggested the makers to use it as a part of the film.


Last seen in Ghanchakkar, Emraan Hashmi's first release of 2014 is Raja Natwarlal where he will be seen playing the role of a conman but at the backdrop, it is a revenge drama where he is on a mission to avenge the bad guys who wronged him. Directed by Kunal Deshmukh and produced by UTV Disney India, Raja Natwaralal stars Paresh Rawal, Kay Kay Menon in prominent roles and it is slated to release on August 29.


After this one, Emraan Hashmi will get busy with his other projects that include Ungli starring Kangna Ranaut and Sanjay Dutt, Hamari Adhuri Kahani starring Vidya Balan and Rajkummar Rao and Mr.X starring Amyra Dastur.