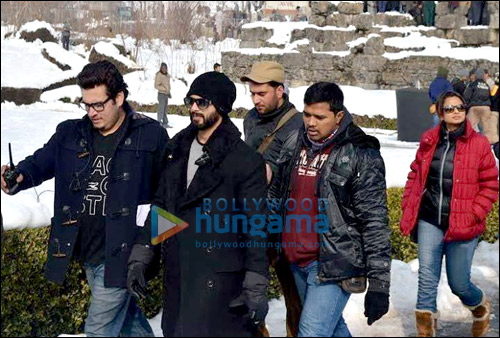 While initially rumours of Shahid Kapoor going bald for his upcoming film Haider were doing the rounds, now it has been confirmed that the actor will be seen in a bald look in the film. Shahid Kapoor will be seen playing the lead in this Indian screen adaptation of the famous William Shakespeare play Hamlet.

Though his bald look is being kept under wraps, fans of the actor are constantly clicking snaps of their favourite hero during their shoot in Kashmir and recently even posted them on a micro-blogging site. Donning a black jacket and skull cap which covered his bald look completely, Shahid was seen in an unshaven look for Haider in these pictures. Buzz is that Shahid shaved his head at a popular saloon in Dal Gate, Srinagar.

However, on one hand when some of his fans are excited to see the actor in a new avatar, on the other, some of the Shanatics (Shahid fans) have been clearly expressing their disappointment over the actor going bald by making #DontGoBaldShahid trend on Twitter.