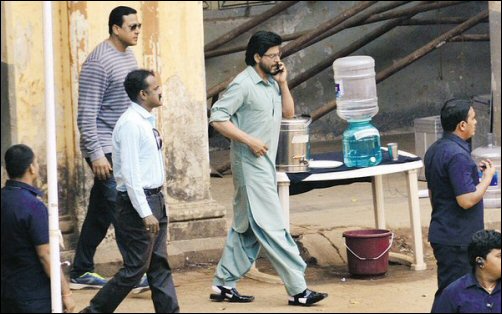 Though his recent release Dilwale failed to live up to expectations despite bringing back the Jodi of Shah Rukh Khan and Kajol, the superstar has a lot to look forward

to in the year 2016. The actor has opted for some unconventional roles in his upcoming releases and one of them is that of a bootlegger in Raees. And he was spotted in his 'Miyan bhai' look

on the sets of the film recently.


Shah Rukh Khan who plays the role of Abdul Latif in Raees was seen on a call break whilst shooting for the film at a Mumbai studio. The actor was seen sporting his bearded look along with

specs and pathani attire. Set in the 80s and based on the Prohibition in Gujarat, Raees also has Nawazuddin Siddiqui playing a tough cop who is on a chase to find the man behind all the