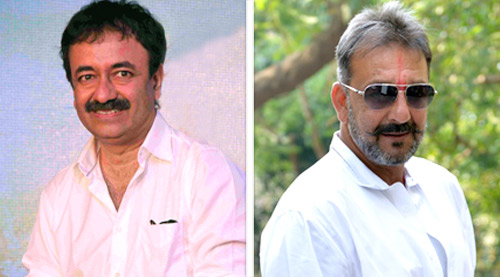 "We would start Sanjay Dutt biopic around July this year and hopefully we should release end of next year, hopefully around Christmas 2017," said noted writer-filmmaker Rajkumar Hirani in a Bollywood Hungama exclusive video interview with Faridoon Shahryar. "We are done with the script. Ranbir is playing Sanjay Dutt's role. I'm waiting for Saala Khadoos to get over, once this is out of the way, we will completely jump into that film," Mr Hirani added. There's a lot of speculation around who will be essaying the key roles of Namrata, Priya and Manyata. "We are in the process. No names as of now."

In the recent times, we have had instances when there has been a talk about Gandhigiri in the Indian Parliament and roses were handed out to those violating the Odd-Even phenomenon in Delhi recently. The legend of Munnabhai lives on. "Very happy that right things have been picked up from the film and they are being used and it also inspires you to do more films like that," Mr Hirani said. "We made two Munnabhai films and then I wanted to do another one. At some stage I felt that all my life I may end up making Munnabhai films, then we made 3 Idiots. We wrote 4-5 different scripts in that period but all of them would come to a point and then lose steam. With Munnabhai every film that you want to do it has to be a great film but whatever I wrote I didn't feel it is matching up to the earlier two then there is no point. Fortunately we have now cracked an idea, which I feel it is even better than what we ever had. It still needs to be developed and fleshed out and it is something I really want to do. I've told Sanju that once this biopic is out of the way we shall do at least one more Munnabhai. This Munnabhai I'm trying for a very unique trait, very unique story. It is just that we have to apply ourselves and get that. We have to do that. Sanju is also very excited with the story," Mr Hirani said excitedly.

Rajkumar Hirani also shared some information on the sequel of 3 Idiots. "We have also hit upon an interesting idea for 3 idiots. It is at a very nascent stage. It is a core idea with Aamir, Sharman and Madhavan. But it is too early to talk about it. We had great fun making 3 Idiots. The sheer thought of going back to the same team excites me," Mr Hirani concluded.