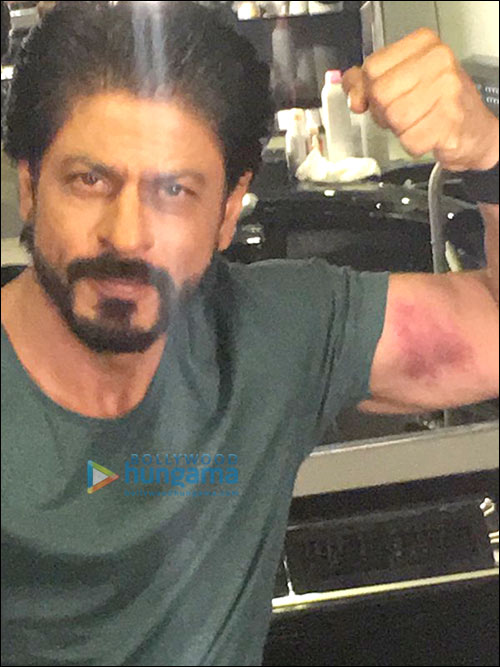 Shah Rukh Khan has only one release in 2015 and all eyes are eagerly waiting for the release of Rohit Shetty's Dilwale. The actor who is busy with the final stages of the film recently took to Twitter to post an image from the sets of the film.

Shah Rukh Khan posted a picture of the injury he suffered on the sets of Dilwale, wittily captioning it as a 'love bite' saying, "My love bite from a bar fight. Being a romantic hero even my injuries look...well...pretty & pink! From sets of #Dilwale". The actor, known for his brilliant sense of humour, recently turned 50 and was flooded with birthday wishes from fans and industry colleagues.

His upcoming film Dilwale directed by Rohit Shetty brings the back the popular Jodi of Shah Rukh and Kajol. It also stars Gen Y stars Varun Dhawan and Kriti Sanon in leading roles along with Varun Sharma, Boman Irani, Vinod Khanna comprising of the supporting cast. The film produced by Red Chillies Entertainment and Rohit Shetty is slated to release on December 18.