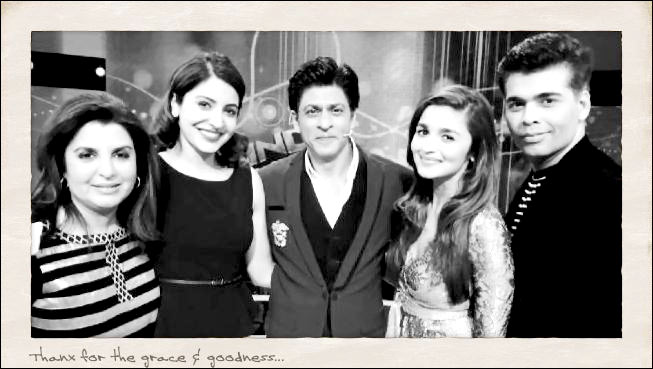 Readers may be aware that Shah Rukh Khan soon will be back on television, hosting yet another television show titled 'Sabse Shaana Kaun'. Not just that, the actor has also been signed as the face of this new entertainment channel.

While Shah Rukh Khan has been juggling between films and TV for the past few days, on the day of the launch his friends decided to extend their support for the actor. Leading ladies Anushka Sharma, Alia Bhatt along with Shah Rukh's closest friends Farah Khan and Karan Johar decided to drop in on the sets of 'Sabse Shaana Kaun' to enjoy the game show. Shah Rukh Khan not only posted a picture with all of them but also expressed his gratitude by saying 'Thank You' on the micro blogging site.

Similarly, Alia Bhatt too shared a picture on Instagram where the celebrities were seen letting their hair down and posed in their usual fun elements, pouting for the lenses and Alia captioned it as "The Shaana Pout !!! #sabseshaanakaun"

Shah Rukh Khan is currently gearing up to start shooting for Excel Entertainment's Raees as he will soon wrap up the schedule of Yash Raj Films' Fan.