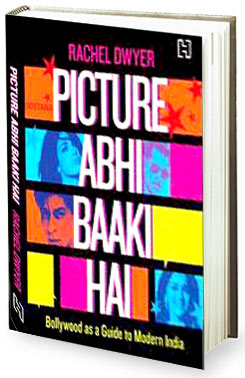 In an avowedly secular state, India's religion and politics are inexorably intertwined, and events associated with politicized religion have brought the nation to crises at several points since liberalization....

Many members of the new middle classes are ambivalent about democracy, which they regard as mob (for which read lower-caste or poor) rule, and favour strong leaders - as was manifested in their support for Anna Hazare's anti-corruption campaign in 2011....

In the nineteenth century, Western orientalists held that India was the repository of great religiosity and spirituality - a rich heritage but one which was located firmly in the past, in contrast to the success of the rational, materialistic and scientific West....

If you are still wondering what does this have to do with Picture Abhi Baaki Hai, a book that has been tagged by author Rachel Dwyer as 'Bollywood as a Guide to Modern India' then well, join the club. A Professor of Indian Cultures and Cinema at SOAS, University of London, she is a learned person no doubt, and going by her work in the past as well, she has wonderful authority over matters related to cinema, Indian in particular. This means that the 250 odd page book that she puts together here is expected to be quite detailed with excellent research coming into play.

However, the trouble lies in the fact that audience for such work is miniscule, in fact very miniscule. The intent is right here as Rachel wants to break the clutter of Bollywood books floating around and picks last 20 years of Hindi movies as the basis for reflecting how reel and real life have been part and parcel of each other. She does that by coming up with six elaborate chapters that pick subjects like Unity, Diversity, Religion, Emotions, Home and The World with the Grand Finale being the shift that has happened between Amitabh Bachchan's Agneepath and Hrithik Roshan's namesake remake.

What one ends up hearing though are detailed accounts of socio, political, religion and economic changes that have happened over a period of time, hence resulting in the aforementioned statements that have been highlighted right at the beginning.

Now for someone who is aiming for a white paper on Indian cinema and visits Picture Abhi Baaki Hai for a strictly academic purpose, there may be some good references in store to get inspired from. No, it isn't as if some anecdotes pop out of nowhere and give you valuable insight into what happened behind the screen during the making of films since the 90s.

However, if you are amongst that segment of readers that wants to look deeper into the context and the subtext of a film, and that too purely as a viewer (because rest assured, even the makers aren't expected to think consciously on these matters while putting together their films), then you may find some value add in what unfolds.

Oh yes, there are mainstream popular films like Dilwale Dulhaniya Le Jayenge, Kabhi Khushi Kabhie Gham, Kuch Kuch Hota Hai, Kabhi Alvida Na Kehna etc. being brought up more often than not (hence substantiating Rachel's claim that she is as much a follower of Yash Raj and Karan Johar film as most amongst the Indian audience are). Still, what one ends up reading isn't quite a mainstream account of what went into these films but the way a historian or a scholar would want to look into this.

Now if you have an appetite for something like this, Picture Abhi Baaki Hai could be the book for you. However, going by an out and out commercial title from Farah Khan's Om Shanti Om here, one expected more 'entertainment' for sure.